We have no roads in Russia…

My tummy turned, I bit my lip and my smile broke into a wry grin, while my eyebrows arched high up into my forehead. The English-speaking daughter of my hostess had just answered my question as to the state of the road to the North with ‘We have no roads in Russia, only destinations.’ I chuckled and hoped that they weren’t as bad as she remembered.  What do these roadies know anyway? ‘Nyet daroga’ to a car driver might not mean the same to Hercules and I. Or it could be a whole lot worse. Hohum. Nothing to do but ride and see, I suppose. 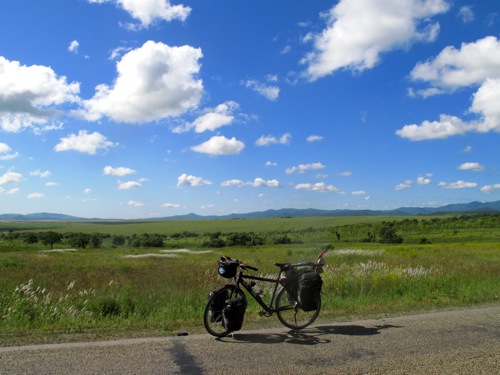 Deliciously calming and refreshing all at once. I was glad to be pedalling away from the factories and traffic of China

So far it has been a mixed bag. My first day was postcardesque pretty in the plains, watched by fluffy clouds ambling through a blue sky. It was a perfect temperature for cycling and a welcome change from the recent sweatbox that was China. There were a few patches of sandy track and construction work, potholes here and there but mostly a reasonable surface and I was able to take in the views and reacquaint myself with a Russia that I last saw on the edge of Europe. It still surprises me that just a few kilometres brought me into a whole different world – the contrast with China is enormous – the people, the culture, the language et al et al. 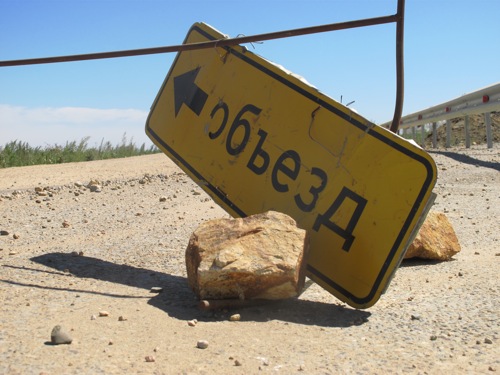 Just a little hiccup in the road surface

After my gentle reintroduction to Russia, I have had a really challenging few days, cycling  into a headwind howling down at me from the North. In three days I believe that this small corner of Russia has seen more rain than Wales sees in a year. Yesterday I woke to a stream running under my tent (and a ball of ants on one of my panniers but I can hardly blame the rain for that) and spent the day, as I did today, pedalling in a cloud. I am sure the landscape must look quite attractive when seen without a hood, grey mist and driving rain.

Rain or no rain, for the time being, I am headed North to Khabarovsk. One more big town after that (Komolomsk on Amur) and then it will be a single track (and not a smidge of tarmac) up to the coast, running through bear and wolf country. This part of the world used to be Siberian tiger country too but there are just a handful of those left now and not on my route, sadly. I just hope it stops raining by then. Already the ditches are flooding and side roads are small streams, with even the main road becoming impressive water features.

As such, I was super happy to be in the dry last night – staying with a lovely family, a whole sofa to call my own. I had asked to pitch my tent under the trees outside their house and, as I had secretly hoped for, they asked me in for tea. I can never tell if it is out of curiosity or pity that people do this, but it is wonderfully warming when it happens. On my first night in Russia I was taken home by a chap to what turned out to be his wedding party and sat supping ‘Champanski’ with some rather drunk but very amiable locals. It couldn’t have been a more different situation to a few hours before, when I cried for the entirety of the six kilometres between the China and Russia border posts, tears streaming down my cheeks, Hercules in the belly of the bus, me on the seat at the front. 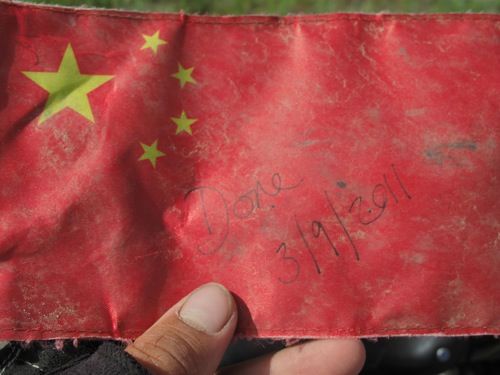 China, tick. Definitely a contender for my favourite country so far. 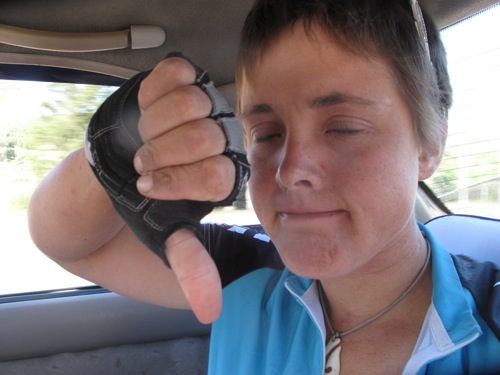 After hours of sitting and waiting and pleading (and tears) for the chance to ride the stretch of ‘No Man’s Land’ rather than bus it, my request was turned down. It was either bus it to Russia or don’t go to Russia. While gutting at the time, it was short lived – my evening ride in the sunshine freshened me up and helped me get it all in perspective. It was only a bus ride, after all – at least Hercules and I were in, and, having successfully avoided the turmeric of the week before, I was healthy again. There are bigger fish to fry than bus rides and, in this case, there was nothing else to be done and no other option for a border point. Thus I continue now as before, heading back each morning to the same spot on the road where I finished the night before, trundling back towards Tower Bridge, one little bit at a time.

So, here’s to humanity and hospitality and human-powered planetary looping once more.

PS The next leg from Russia to Japan is the most complex of the whole expedition and will be monumentally challenging in physical terms, too. A blog with some details to follow on ‘The Far Eastern Question’

PPS You may have noticed the Schools HQ has gone quiet over the summer. We have swapped Education providers and are just in the final throes of getting it going again. Please send your ‘Ask Sarah’ questions and satellite link requests to education@sarahouten.com

PPPS Keep crossing your fingers for the successful completion of ‘Operation: Nelson into Russia’. Last I heard he was in Seoul. So near, but not quite there yet.

PPPPS Apologies for those with Tracker fatigue. Annoying but not terminal, I promise. We had a technical hitch which has taken some unravelling to sort. Bear with us, it should be back up to date before you can say ‘I have tracker fatigue’.

14 Responses to We have no roads in Russia…