Today we head off North ready for Stage 1 of our Pennine Trek. The bags are just about packed – I thought females were the worst but I think my wee brother Matt wins hands down-he is taking forever! Ah yes, mustn’t forget Dad, too…

As well as my 23rd birthday (buspass is in the post, so I’m told) Day 1 is Edale to Crowden via Kinder Scout – up and over – a breezy 16 miles. Next is on to Standedge, then Day 3 to Hebden Bridge and finally Ponden Mill on Day 4. It seems a strange irony that we should be starting a memorial walk for Dad on the day that I came into the world nearly a quarter of a century ago, very much helped by him. This one’s for you, Pops.

PS If I’m not back in a week, then you’ll know I’ve either been swallowed by a bog, eaten by a sheep or run off into the wild to become an ascetic. 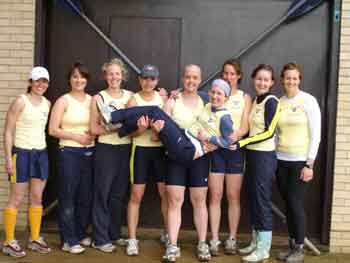 Complete contrast-this photo shows me on my 21st birthday,with my College crew, having just raced in Summer Eights. They were happy happy days. N.B I am the baldy in the middle!