Things are hotting up out here. It’s nearly time to go. 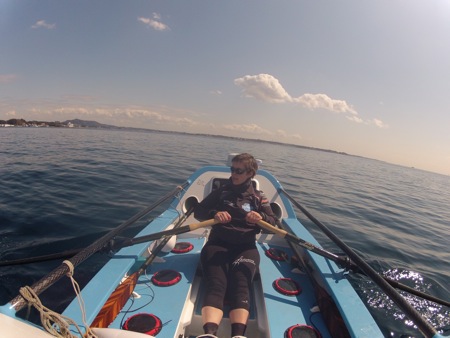 Pottering about with Gulliver in the bay

In two weeks time Mum arrives. It will have been a full year since we gripped each other tightly on the wharf of HMS President and I grinned my way under Tower Bridge. A week with Mum will be followed by the same with the lovely Kris and Maren Hallenga, friends and founders of CoppaFeel!, one of my very fab supported charities.

On April 12th we will pack Gulliver for his ride to Choshi, Chiba up the coast; I shall say goodbye to my ‘family’ in Sajima and head up towards the airport. As the twins fly home, Justine – one of my team mates  – will fly in to help me in my final week of preparations. We aim to go on standby from April 20th. As soon as the weather is good, I shall go. For those in Japan wishing to come and wave me off, we hope to post details online three days before departure.

I have recognised the swinging emotions and adrenaline which characterised the final build up to my previous big departures – across the Indian ocean in 2009 and April 1st last year at the start of this one. I try and make the adrenaline my friend – letting fears have their voice,  nagging noises do their bit – and letting the excitement drive me on.

Preparations are trucking along in the way that preparations for these things do. Little hurdles and conundrums pop up here and there (e.g. a sprained back joint a few weeks ago) and red tape puzzles and frustrates us from time to time. But, with persistence, creativity and plenty of time out to play,  my team at home and my friends and supporters out here in Japan are getting there. Onwards, onwards, onwards.

Meanwhile, Gulliver continues to look and feel more like a home/office/rowing pod. The collection of trinkets woven into the cabin netting are steadily growing, tool boxes are being filled and equipment stowed in cubby holes and lockers, gadgets are tested and retested and the To Do List shortens and regrows accordingly. 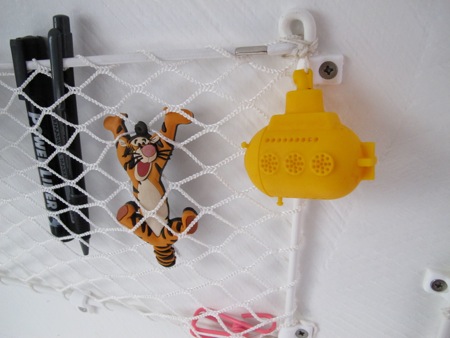 Reminders of home and friends in the cabin

I slept in him for the first time the other week and am happy to report it all went smoothly, though I had forgotten how tiny a little rowing cabin can feel. The jury is still out on which way round I will sleep – head amidships (in the middle) and enjoying the headroom or head at the stern (back) of the cabin and enjoying the stars.

Outside of boaty tinkering, I am training and feeding in readiness for the journey ahead and now just have a final couple of talks to give.  Within the team we have been working hard to plan the overhaul of the website (due to go live in the next couple of weeks) and have also bringing our shiny new Media Manager Jenny Ellery up to speed.

All in all, busy but happy and focussed times in this final run  in to the very final run before the ocean.