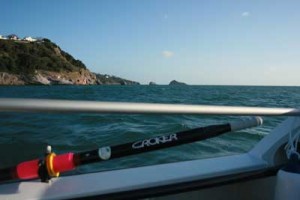 I actually landed back in Rutland at the weekend, somewhat worse for wear after days in a chilly boat, rowing lots and feeling pretty run down. Still, it was a great week for learning and getting some miles at sea, as well as testing out different things and handling ‘Dippers in a range of conditions and weathers. Night and day, too – really important to get used to rowing in the dark, so of course at this time of the year it’s easy as night time takes up most of the day!

the favourite
My favourite night time row was across Tor Bay, from Brixham to Torquay. It was a perfectly still night – calm and peaceful. The wind had dropped to nothing. On the seaward side of the bay were the twinkly lights from the various ships moored up for the night, waiting out the incoming bad weather. To the other were the rows and rows of lights from the houses on the sea front of the seaside towns – Torquay, Paignton, Brixham.

most challenging
The most challenging bit of rowing was the approaches to Exmouth Marina – at night, with the wind blowing a hoolie and pushing me out to sea – I had to fight against the waves which wanted to squash me on the rocks and pick my way through the channel. It’s amazing what strength you can find when you need it – I was fairly jolly exhausted after a 10 hour day of rowing up the coast and it took a good couple of hours to get in to safety. The ocean will be easier – there’s no tides, nothing to bang into and no danger of washing up on the rocks! But it was all good practice.

the longest
The longest distance I rowed that week was out from Torquay and up the coast to Exmouth, mostly with a following wind so I did rack up some pretty sprint-like speeds. A whole 4.5 knots at one point! This translates to jogging speed for the non-boaty folk among us…. It was a great morning’s rowing underneath crisp blue skies, with various birds feeding off Hope’s Nose and then pushing up along the coast past bright red sandstone cliffs. It was beautiful. I would have stopped at Teignmouth if the tide’s had been right but I was there at almost the lowest point of tide – so I was being pushed out to sea and also would have had a massive sand bar to contend with. So instead I thought the extra miles up to Exmouth would be good training, particularly as night was falling! It was a long hard slog to my bed that night – I was being pushed out to sea faster than I was getting there. And I was tired. I was cold. I was hungry. And I felt fairly rubbish. So all in all it was a very good experience in pushing yourself when you’d rather be tucked up and snoozing. 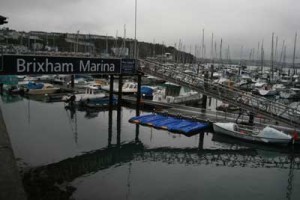 thank you I was amazed at the help I received from local folks and I am extremely grateful for the kindness and generosity shown to me – there were the Brixham Marina guys who made sure I was OK and monitored my plans; at Torquay they let me spend the night pro gratis; Keith the Harbour Master in Exmouth was extremely helpful and Marcia and Peter Sands and their daughters Lisa and Rosie kindly put me up for the night, too. Never have I been so thankful for a warm bed! Then my final thank you goes to the three Knights in Shining Armour who helped me get the trailer and Walter (the Land Rover) off the beach – I need to practice my 4×4 driving, clearly…

happy days
Happy days though and I’m excited about getting her out to the salty realms again. Probably not Devon next time as it’s a bit of a trek down there and time is a-ticking-away, but I’m not so far from The Wash up here in Rutland so if the weather is good when I next have some days off work then maybe we’ll head out there for a spin.

One Response to trip tales