Less than five months to go until April 1st. This means fewer than 150 days until  I paddle out underneath Tower Bridge, London en route to the world. Day 1 of a journey which will take me right around the planet under human power – kayaking to France, cycling and paddling to Japan, rowing to Canada across the North Pacific, cycling to Nova Scotia and rowing back across the Atlantic to the UK, London2London: Via the World.

The expedition next year will involve four significant open water crossings by kayak and some coastal paddles. Given the nature of the paddles I decided that I wanted a Support Kayaker to join me for these sections. 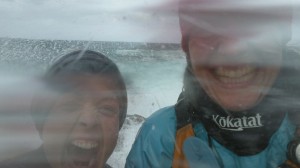 Earlier this year I asked someone at my local club if he knew of anyone I should ask, He simply said, ‘Justine. You need Justine.’ I smiled and wondered who she was, so brilliant to be known only by her first name. Within a few minutes of reading of past and future exploits, watching film clips of her paddling adventures and documentaries on her website, I knew that I wanted this Justine on my team. She has heaps of experience and credentials, numerous major crossings and circumnavigations under her boat and the respect and following of paddlers round the world. She’s paddled the Bass Straits, faced off Russian soldiers during an expedition in Kamchatka, filmed in Israel, looped Tasmania, is about to circle Tierra del Fuego and from day to day braves the chilly waters of Wales. She’s got an impressive list of film brilliance on her CV too, winning numerous awards for her documentaries at home and abroad.  It’s cool too that she’s a woman – in a community dominated by bearded folk – it’s always good to work with other women, especially ones with kick-ass go-get-em attitude.  For more info on Justine and her documentaries click here www.cackletv.com 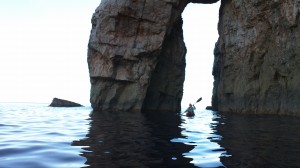 So that’s how I found Justine and that’s why we ended up exchanging the Autumnal UK chill for the warm sunshine of Menorca recently. Islands are great destinations for kayaking training, because when the wind is up in one area, it will be sheltered on another coast – rough or smooth, you can find it all.  Small ones like Menorca, that can be crossed by car in forty minutes and boasting friendly professional outfitters like Menorca en Kayak, are perfect.

Besides picking up new skills, polishing old ones and adding some mileage and rough water paddling to my CV, the main aim was for Justine and I to get to know each other and talk about L2L. The week was a success: we clocked miles and miles, bagged a respectable crossing, had a run in with the local constabulary (no expedition would be complete without one), laughed lots, went out in all weathers, did our bit for the wildlife with an impromptu litter pick, camped under silvery moons in stunning locations, and showed the Menorcan people that women kayak too. (Apparently it’s not the norm over in the Balaerics, especially to find two females out on their own.) The Menorcan coast is picture book beautiful, with cliffs moulded and morphed out of a Geology lover’s heaven and painted in a chorus of colours, made all the richer by the cobalt blues and turquoise hues of the sea. It is gorgeous. 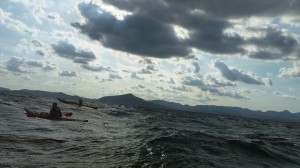 Besides the big surf day, my favourite was the 24 mile paddle to Mallorca, my first decent crossing in a kayak. Quim and Carlos from Menorca en Kayak joined us and we four spent 9 hours, paddling into feisty head winds to the beach on the other side. In favourable conditions that crossing takes five hours, around half the time it took us. The locals may have called us loco but I was glad of the headwind and the endurance test. Training wouldn’t be training if it wasn’t hard, eh? And the big surf day – I was glad to have sore eyes from the salt whipped up from the sea, and to have a few of those will-she-won’t-she-make-it sort of moments as the wave lines thundered into me – it was all about expanding my comfort zone and picking up skills. 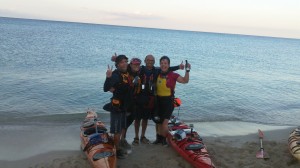 That said, when it comes to the crossings for the expedition next year, I won’t say no to a healthy tail wind and I won’t be too disgruntled if we don’t get wiped out in the surf. But I know that whatever happens in these sections, surf or tail wind, boshing or no, that the chap who recommended Justine was right – she is an extraordinary woman. In Menorca, as our first day of polite chat turned into incessant chatter and expedition banter, I came to learn that she is the perfect choice for my team.

Bring on the world. 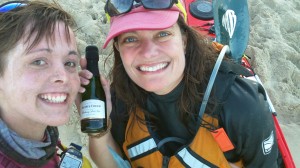 Thanks to the lovely husband and wife team of Carlos and M. Teresa, and their company Menorca en Kayak and their friend Eva for kindly sponsoring and hosting us.  If you are a paddler, then Menorca should go on your hit-list and these wonderful folks in Es Grau should be your first port of call.

PS  Book: The manuscript goes for typesetting shortly; Ellen MacArthur is writing the Foreword – we are nearly there! You can pre-order ‘A Dip in the Ocean’ online via Amazon or email hello@sarahouten.co.uk for an order form to get your signed copies at a discounted price of £6.99. (Publication February 7th 2011 RRP £8.99)