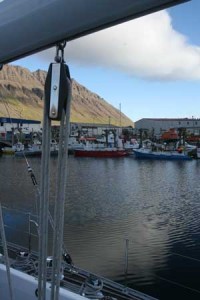 After 16 nights on the good ship Velvet I must say I was a bit excited by the thought of a real bed which didn’t rock, hot water and contact with the real world again – so much to do, people to see, places etc etc. That said, the adventure was a great one – I learned lots, crossed the North Atlantic, bounced through the Irish sea in a Force Ten gale (almost a hurricane, would you believe it?!) and survived to tell the tale. What’s more, is that even after those 5m waves, midnight watches and all the time spent surrounded by just the big blue (actually read grey/white for the most part) is that I was super excited by it all and am still very much looking forward to the Indian. In the back of my mind was a vague hypothetical proposition that I might grow the ‘I’m scared of water’ gene in my sleep one night and suddenly grow acutely agrophobic, but I didn’t. I am still me and so there are no plans to call it off and fly a desk or something instead; Sorry Mum! (I think she secretly wishes I would…must be a Mum thing.)

For the boaties and interested others among you I was sailing an Oyster 55, with 6 of us rotating through the watches. We did a couple of day sails to start with, leaving from Isajford right up in the northy lefty corner of Iceland. Note to anyone flying up there on the Flybus: I think the pilot IS meant to get that close to the mountain as he gets ready to land – he’s not just on Kamikaze training! We then made our way down to Hejmei, one of the Westman Islands – a wee archipelago bobbing about off the southy westy end of the mainland- where we were weathered in for a couple of days waiting for a 55 knot gale to blow through. I’m pretty pleased we did as I lost my sea legs overboard for a brief moment and also had the chance to nip up Eldfell the volcano which blew its top in the 70’s and wiped out nearly half the island. I can well recommend the dinky natural history museum ( saw a baby puffin – aptly named a ‘puffling’) and also taking out perhaps multiple mortgages to buy anything while you are there – my biggest spend was probably a back issue of the Sunday Times for nearly £7!! 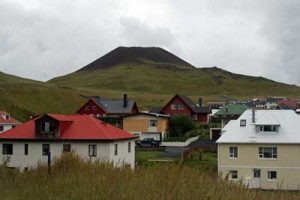 The next bit of the passage was pretty straightforward – we set off from the Westmans’ on the Saturday and finally docked in Bangor NI on Thursday evening to fill up with fuel. I had thought we might be stopping off in my beloved Hebrides for a quick whirl but a wee dram or two in a local hostelry with some of my new-found buddies made the blow a bit softer. From then we pushed on through to Plymouth -rounding off some 1,400 miles at sea. All good experience. 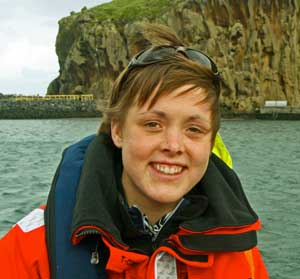 Some of the best experiences, as one might expect with a Greeny, involved wildlife. I never tire of watching shearwaters and there were plenty of Manx out to play as well as a few Sooty, too. These guys, along with the fulmars, are incredible to watch in heavy weather, soaring up and over the wave crests and showing off their acrobatic skills – very neat indeed. Gannets are always a crowd-pleaser too and there were guillemots, razorbills, storm petrels, gulls of all shapes and sizes, the ebullious Arctic skuas and then a good hand-full of terns and kittiwakes thrown in for good measure as well. And then, if we could have a drum roll please, there were the sperm whales. Talk about the icing on the cake! It was a sunny day, following some splashy bits, so we were quite happy to be cruising along with our friend ‘Auto’ (Mr Pilot) doing the driving for us when we came across the whale. Soon all but the heaviest sleepers were up from their bunks to see the whale after my (rather excitable) call to arms. I reckon the 12m giant must have just surfaced from a big dive and squid chase (they are one of the deepest diving mammals – we’re talking a couple of thousand metres) as he was right at the surface, just chugging along catching the rays. Happy days. Then there was the Cetacean Breakfast one morning when I would normally be dreaming and even the most ardent clubbers would retire to bed, when a sperm whale, then a little band of pilot whales and to top it off some dolphins (white-striped or white-beaked?) called by. Right up there at the top of the Leader Board was the common dolphins – there always seemed to be some popping in for a ride on our bow wave or to eye up our boat. And one evening, somewhere out in Cardigan Bay, we were joined by more than I have ever seen. I am guessing 40 animals. The most special bit however was the fact that they were lit up by the bioluminescence in the water – tracing their weaving, spinning cavorting as they played around the boat. Think underwater fireworks – super and very entertaining.

Happy days, once again and some really solid experience in terms of sea miles, weather systems and ocean life. And the scenery up there is stunning, too – well worth a visit.

Lots of exciting developments soon to be announced and regular readers will (I hope!) notice a few more additions to the site as well…just watch this space for the rest…