About London2London: Via the World

The London2London: Via the World expedition is British adventurer Sarah Outen’s bid to loop the planet using a rowing boat, bike and kayak. In geographical terms it is considered ‘travelling around the Northern hemisphere’. It is a charity fundraising and storytelling mission as well as a massive adventure.

Starting in London under the iconic Tower Bridge on April 1st 2011, the journey has clocked nearly 22,000 miles as of Spring 2015 with the completion of Sarah’s North American bike ride. The journey will have taken 2 years longer than initially planned, having faced lots of challenges and changes to timing, route and equipment plans on the way, mostly through extreme weather in the North Pacific. ETA Tower Bridge, Autumn 2015.

London2London is not classified as an official global circumnavigation of the earth as it does not cross through antipodal points (opposite points on the earth’s surface) or the equator.A geographically correct description is journey ‘around the Northern Hemisphere’. We often use the phrase ‘looping’ or ‘circling’ as it is a very Sarah thing to say. There is debate over what should be described as ‘around the world’. The Guinness Classification includes it in the circumnavigation billing, and yet Gap Year travellers can make an Around the World journey….

Following on from the above, the journey is not classified in any category in its entirety for official recognition by Guinness World Records – and nor has it tried to be. However, as far as we know, Sarah is the first woman to attempt a journey of this nature and the only person to attempt such a journey around the Northern Hemisphere in the W-E direction.

The original goal of Sarah’s journey was to be entirely human-powered, using just her rowing boat, bike, kayak and feet to row, kayak, bike and walk her route. The forced diversion to Alaska in 2013 on the North Pacific row meant an additional 1500 miles of sea kayaking through the Aleutian Islands and along the Alaskan Peninsula the following year. Sarah and her kayaking partner Justine Curgenven made the decision to use small sails on their kayaks as they paddled to help them move more swiftly through long passes in the changeable conditions of the region. The use of the sail means that this portion of Sarah’s journey should be described as ‘wind assisted’.

Sarah’s own criteria for her journey are:

* Do everything possible to come home safely

* Do everything possible to make a continuous loop i.e. return to exactly the same point at the start of a  phase to touch the same landmark (e.g. the marina ladder in Choshi, Japan) before continuing on.

* Luggage can travel by vehicle if offered, so long as Sarah walks or rides the route. e.g. in the event of bike breakdown or someone offering to transport luggage.

Changes in or out of Sarah’s control:

* On reaching Adak Island, Alaska at the end of her Pacific row in 2013, Sarah was unable to make landfall due to rocks, strong currents and lack of depth-sounding equipment on the support boat. She officially ended her row in Camel Bay. For linking up the ongoing journey by kayak the following spring, it was decided that kayaking to the south end of the island was not sensible due to strong currents and so Sarah hiked across the island to the bay to get as close as possible to the point she had rowed to with Happy Socks, a mile from the beach, and hike back to the kayak journey start point.

* The forced diversion to the Aleutian Islands in 2013 on the second attempt to row across the Pacific Ocean added another leg to the journey – a 1500 mile kayak section to the nearest road. Wild weather, long open water crossings and strong currents  led Sarah and her kayaking partner Justine Curgenven to use small sails on their kayaks as well as paddling to improve speed and therefore safety. This makes this portion of Sarah’s journey wind-assisted.

In official record terms therefore, the journey cannot be classified as a total human-powered journey nor can it be deemed a complete circuit.

Sarah’s expeditions taught her to embrace the journey and its evolution long ago – titles and labels are not important to her unless records or classifications are sought. She has never sought to be judged by anyone’s standards but her own mission criteria for the journey. NB: Sarah’s journey is not a circumnavigation of the world. The official rules for this classification include passing through the equator twice and two antipodal points (opposite points on the earth’s surface). The same classification includes ‘around the world journey’, hence annoying some quarters when media use this term. Sarah 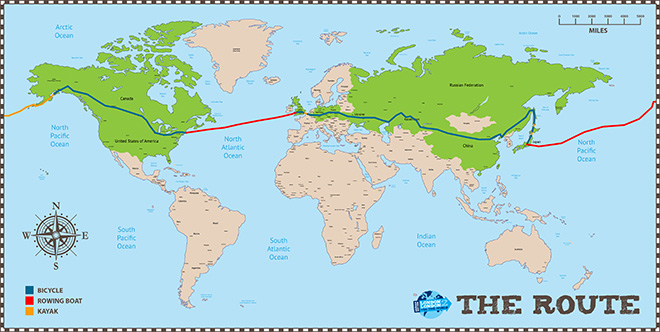 “I love the challenge, the battles, the intimacy with nature and the perspective gained from travelling by human power. You are so close to the water, the landscape and wildlife.  I love the purity of knowing that when you are alone, the immediate responsibility lies on your shoulders. I do have a team at home and at certain times some in-location support, but mostly it is just me. It’s a wonderful mix of excitement, fear and unknowns.

Even though I journey solo for the most part, it is not just my journey. I love sharing my adventures, especially with children, and hope that it inspires them to look outwards to the world and learn; and to look inwards to themselves and their own dreams and goals. I am journeying for everyone I have met along the way too and for those who have helped me get this far.”

The story so far

“Sarah will face dangers on a daily basis, which only the hardiest could tolerate. But I’m sure she will succeed and confirm that she is an adventurer and expeditioner second to none.” Sir Ranulph Fiennes

“When I first met her, I knew that Sarah was a very special person with fire in her belly. I wish her good luck for London2London: Via the World, I think it’s a fantastic project particularly working with young people to inspire them and to teach them all about her journeys.” Dame Ellen MacArthur 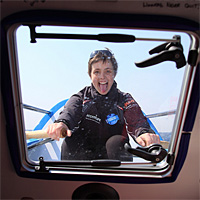 If you’d like to find out more about the expedition and to follow Sarah’s progress, have a look at the sections below:

With Sarah’s Journey Tracker you can follow exactly where she is on her expedition.

London2London: Via the World is all about human power. Sarah’s travelling companions are Nelson and Krissy the kayaks, Hercules the bike and Happy Socks the rowing boat. Her original rowing boat, Gulliver, had to be left at sea in 2012. We are hoping he washes ashore somwhere, someday. Krissy is a three-piece kayak built especially for the Alaskan journey in 2014. The Alaksan kayaking section in 2014 can be described as ‘wind-assisted’ as Sarah used a small sail on her kayak, for safety in the long, rough passes. 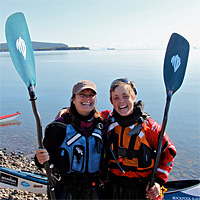 Here you’ll find all the big numbers you could possibly want to know about the expedition.