Sea lions make very noisy neighbours. This we discovered a couple of days ago when three of them hauled up at half four in the morning not far from our tent and started their grunting and snorting and honking at each other. From what we have seen in the daytime it seems to be boys fighting over girls. When you’re not trying to catch the final precious hours of snoozing ahead of a big crossing it is interesting and entertaining to watch. When you are trying to sleep and you’re not sure if the hulking beasts can see that you are in fact a harmless almost sleeping tent and not another hulking beast wanting a fight it is a bit unnerving to see other dark shadows dragging up through the noisy gravel, barking into the still night. 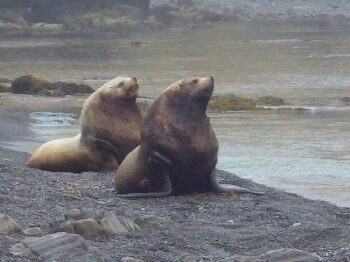 I already knew how brilliant it is to watch an albatross soar low over the waves and glide over your head to check you out, having seen hundreds out on the Indian and Pacific rows. I shall never tire of watching them, especially when the chips are down which they were for our crossing to Seguam Island on Monday. I was tired and am getting over a cold so didn’t feel my perkiest. As we  paddled into headwinds in the fog I felt happy to see these masters of the ocean making light of the miles, even if we weren’t. Lucky birds above the water don’t have to contend with tides pulling them this way and that! The albies were joined by tufted puffins, auklets, sooty shear waters and fulmars and guillemots. 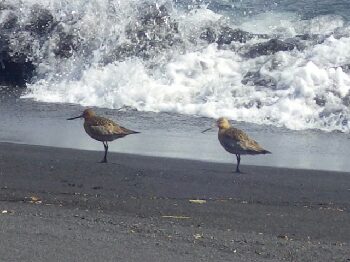 The birdlife up here in the Aleutians is fantastic. Always someone with wings to look at.

Paddling into fog is a bit demoralising because you can’t see your goal – in this case the volcanic peaks of Seguam Island just fifteen miles across the water from our island, Amlia. What was even more demoralising, or rather frustrating, was that the ebbing tide was pulling us south faster than we could make good progress East. So it was a long old haul to Seguam and I felt mentally and physically challenged by it. Mentally because I felt I had emptied the tank and wondered how on earth I could complete the longest crossing of the trip to Amukta Island in a few days time. With all that in mind, we wer more than three hours into it when we saw the snowy lower slopes of one of Seguam’s peaks peering at us out of the cloud. As though wearing a towel wrapped around her middle, we then saw various peaks – some snowy, Some thick with rocky lava and another semi-clad which looked like a volcanic shaped Christmas pudding with white sauce. It was magnificent. 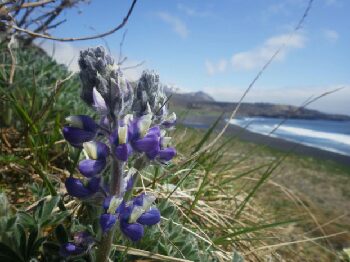 The flowers are just starting to appear out here in Seguam

It felt like forever toreach Lava cove, where we thought we would camp – one of very few sheltered landing spots. The rest of the shoreline is bluff and inaccessible. As it was we landed in dumping surf, the waves being held up high by the offshore wind which was accelerating down the valleys straight into our faces like a repeated punch. Happy is a weary paddler to get safely hauled up onto the beach out of the surf after eleven hours in the kayak.

We have been here two days now, resting and recharging – mind, body and batteries in the rare and much welcome sunshine. After Justine discovered a missing part to the stove on our first night we have been cooking on a campfire. Using my saw and machete to baton logs and our spark sticks to light it as taught by Patrick of Backwoods Survival school, we have been very satisfied with ourselves. We have cooked pancakes, pizzas, stew, chapatis and potato cakes and added lots of our foraged favourite – beach greens and lovage. Sadly it is too surfy to do any fishing and the crab trap I made with a washed up bottle got taken by the waves, so that will have to wait. Talking of washing, Mum, don’t worry – we even had a wash and did our laundry yesterday in a sawn barrel I made. So at least we smell a bit different. It has been a wonderful, gentle, beautiful and tasty couple of days on our beach. 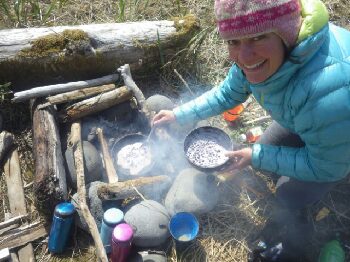 A couple of days off means campfire cooking

At the moment it looks like Friday will be a good day to paddle to the end of the island ahead of the monster crossing on Saturday – a cheeky 37 miles from island to island with another 5 or so to the nearest beach for camping. Onwards to another wild and beautiful island.

P.s Check out the tracker here, Hourly updates when we paddle
P.p.s Check out Justine’s blogs

6 Responses to Sea lions and waterfalls