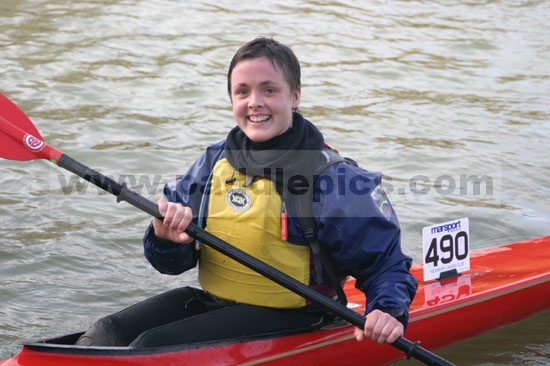 As part of endurance training for the ocean next year, I am aiming to race in the Devizes to Westminster in March. 125 miles of paddling: along the Kennet & Avon Canal and then the Thames into London, spread over 4 days over the Easter weekend. My original plan was to double up with an old school friend but when she pulled out, the obvious option was to solo it.

While I have been doing land based strength and endurance work for months now, my water time with paddle in hand has been more limited. Rather non-existent in fact, with other things to be getting on with and a river in flood. Holidays. Work. Excuses excuses I know, but I am at least on my way to being super fit. The mind is strong as ever and, after the London Marathon last year when toe nails were falling off, my hip was resigning from service and the heat wave was in full swing, I know that however uncomfortable it is, I will keep on going.

So, Sunday’s first race in the Waterside Series was also my first ever paddling race and definitely a training outing. 13.5 miles from Great Bedwyn to Newbury, jumping out of the boat some 20 times or more for locks and low bridges, shouldering the boat round to the other side and then throwing myself back in and pushing away. The slick well oiled get-out routines of the more experienced in the field were slightly intimidating at first, for someone that has only ever practised it a handful of times. But by the end I was leaping in and out of my boat in super quick time, too. Like I said, this was a training race.

Alot learned – notably I now have an idea of my paddling speed (fairly jolly useful), so hopefully we can guage a bit better where and when Alex (Support Crew in Chief) will meet me along the course to feed/water me. On Sunday it was 9 miles in before we hooked up as I was paddling faster than we expected. So excited I was to see him that I completely misjudged the landing angle for coming alongside and promptly fell out of the boat. Smooth it was not; funny it was – even if the more serious of the supporters gave me that ‘what the hell are you doing?’ look.

The sun was out, the sky was blue and I was loving the learning curve and chance to push myself. Having only been in a boat once since Christmas (read the day before the race) I was mightily chuffed to arrive at Newbury in 3:01.53 – admittedly not setting any speed records this time but giving me a fairly sizeable margin to improve by for the next race in 2 weeks. I think polishing up my get out routine will shave more than half an hour off , and with a bit of coaching in the boat to improve my technique I will be in Westminster before I know it. Watch this space…

Lots going on behind the scenes to report about: Brief synopsis here, promise to follow up soon. Enviro section coming along really well, to be published in a couple of weeks – including the RSPB partnership and BVCO; many product suppliers promising support – inlcuding Berghaus, Speedo, Ocean Safety, Musto, Marine Track, Cactus Navigation; weather training about to commence with Ricardo Diniz