Of ice and men 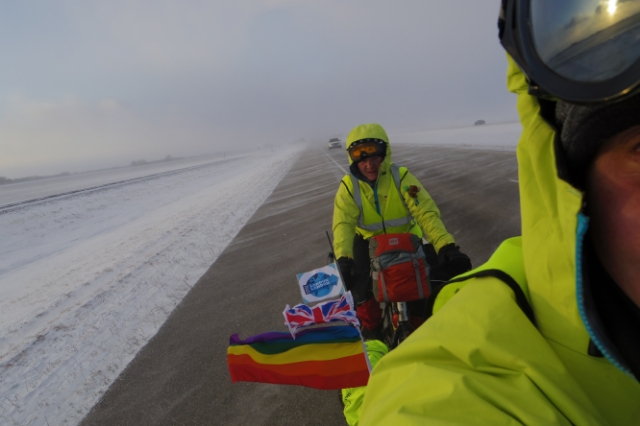 ‘I thought you were guys when I first drove past..’

‘Did anyone ever tell you this is just a guy thing?’

If I understood his question correctly, it may be one of the most perceptive questions I have ever been asked at a talk – by adult or child. By correctly, I mean understanding this young lad to be questioning whether I had ever met with such comments, rather than him telling me that he believed, and did I not know, that adventure is just a guy thing. 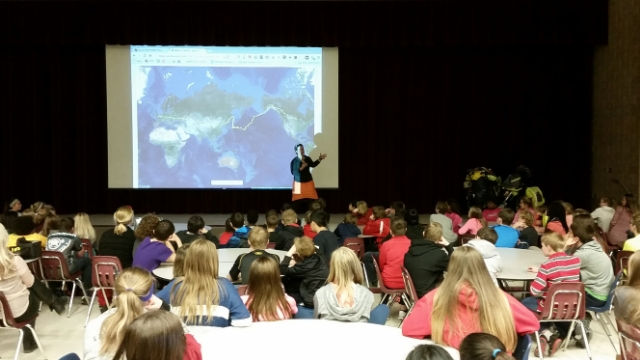 ‘Your bike’s awesome’.. as Hercules was wheeled on stage

I was really glad that this boy of 12 asked me about it being a ‘guy thing.’  Sad, too, that he lives in a society where the social vibes – in and out of the media, and home and away, must be suggesting to him that adventure is only for those people lucky enough (*cue wry smile) to be born with a Y chromosome. It is one thing to be stood barefoot in front of a class of youngsters sharing tales about how the fully laden bike behind me brought me to their country, and how various other small muscle-powered boats carried me across the sea. But to confront that question out loud with words and thoughts on the topic itself was probably more powerful. Or perhaps not. Project Manager Sara said that her 10 year old daughter had been really excited watching the preview film that Justine has made about our Alaskan kayaking adventures last summer because she was watching women – future older versions of herself – doing extreme things in the outdoors rather than the usual beards she sees on Discovery and mainstream TV.

Without confronting these things and talking about them – amongst adults and young people alike – clearly such sexism is often acknowledged and accepted and the status quo can continue on. It is good to swirl things up and encourage debate and discussion.  Chatting to other adults about the ‘guy thing’ question later that day, we were told that this area of the American Mid West is a patriarchal place, so it is easy to see where it might start. (This is not to say there are not strong women up here, either by the way) On TV the adventurous-looking ads for huge pick up trucks are coupled with testosterone in bucketloads and in outdoor stores, there are pictures of square jawed blokes doing outdoorsy things. Out on the road recently we were told by a driver that he had taken us for guys on first seeing us pedal past ‘because he didn’t expect to see ladies out riding bikes at this time of the year’. I raised my eyebrows into a ‘Did-I-really-just-hear-you-say-that?’ look. I guess that at home in the UK among friends there is nothing extraordinary in my doing what I am doing as a female. I have always been surrounded by strong women and grown up playing sports and doing adventurous things under their guidance, with their companionship etc. The glaring omission for me would be in the media – besides Ellen MacArthur’s Vendee Globe campaign on TV while I was a teenager over a decade ago, I can’t say I have been overwhelmed with media examples of women doing amazing things. This isn’t to say they aren’t doing amazing things – just that they aren’t making the media coverage and the mainstream with the same frequency or airtime/print space as the guys. And it doesn’t even have to be ‘amazing’ to be valid and valued as example and inspiration to folks that girls can, too.

I imagine I might be talking to the converted here – you are reading a blog of an expedition by a woman, after all. But my shout would be to seek out stories of women doing cool things and share them and demand from our media outlets that we ladies are given as much air time, print space, sponsorship and kudos as the beards. And that, most of all, girls and women are given the same support and encouragement and opportunities as their male counterparts – in and out of sport and adventure. It is the 21st Century after all. 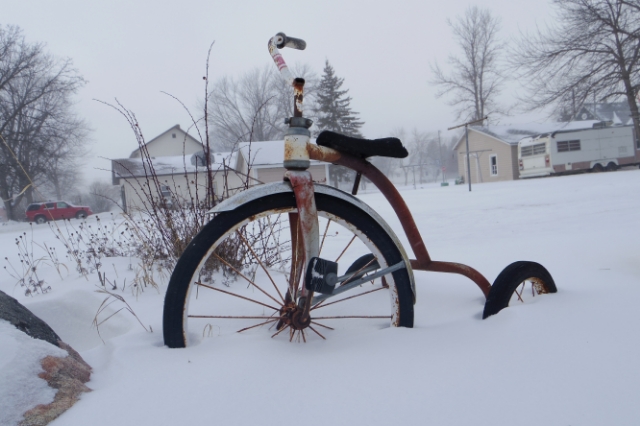 Stranded in the snow. 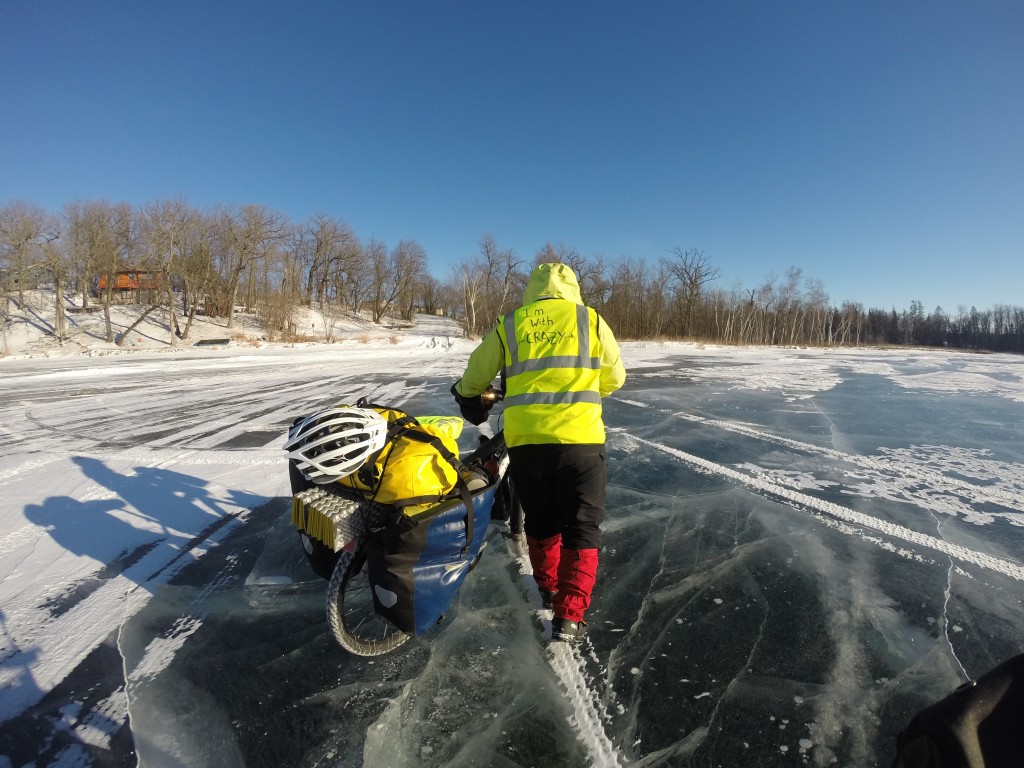 Surreal to be walking on a frozen lake

In other news, Lucy and I continue to pedal when we can and wait out the blizzardy stuff when we cannot, now heading SE through Minnesota, state of ‘10,000 lakes’. With the sub zero temperatures, lakes and rivers are freezing or frozen, turning the ice into pop-up fishing communities of huts and shacks and trailers. Yesterday we pedalled out onto the ice of one such frozen lake to meet one such fisherman. 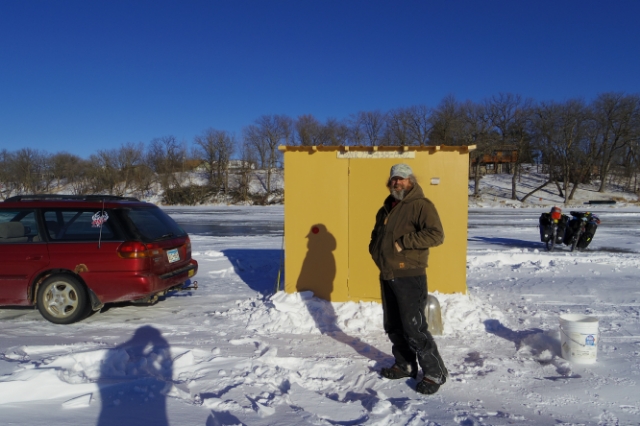 Jeff and his ice fishing hut

Jeff was the closest to the slipway and as we were wary of the creaking and cracking and the idea of falling through (logic played no part here) we opted to say hello to him rather than venture out further to other trailers.

Jeff was getting set up, piling snow around the bottom of his home made insulated 5 ft x 3 ft shack, having lined it up over the two head-sized holes he had drilled through the ice. 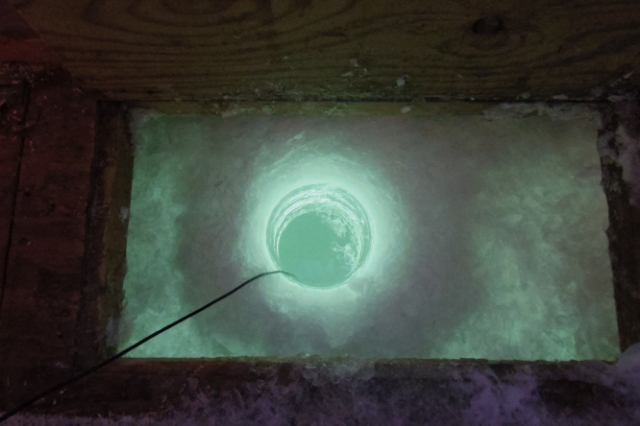 The icy blue green was mesmerising

‘Wanna see inside?’ he said as he opened up the door to show us the set up. A curtain was drawn to make it easier to peer into the pale green blue of the ice hole and a small heater warmed the space. A small spool of line and simple lure hung above the hole and Jeff ladled out ice to clear the water. He dropped a small fish-shaped camera down on a line and showed us the bottom of the lake as he turned the camera, telling us of a ‘3 foot Northern beauty’ which had swum in and out of shot a few times. Two little perch lay flaccid in a bucket of ice, hauled out of their icy winter home to become fertiliser for Jeff’s garden. 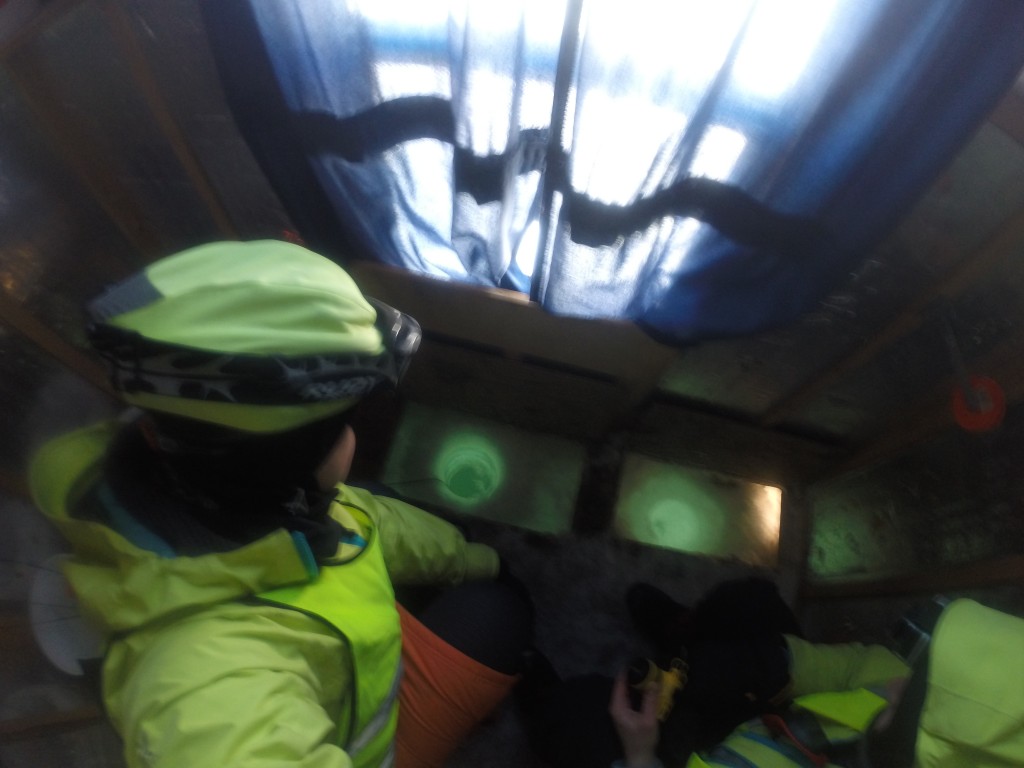 With a heater and insulated walls, it was a cosy treat to be inside

As we walked our bikes off the ice, wondering how a 3 foot fish could be hauled up through said ice holes, Jeff went back to his FishTV, setting up for the experience. If he is anything like my brother Matt, I know that just being out there on the ice will be as important as catching anything. There is a lot to be said for just being. As I understand, ice fishing for many is a lot about beering too – and, having spent a few nights with folks from this part of the world, I can well believe it.

P.P.S Huge thanks to recent donors to the L2L charities. If you’d like to follow suit – please do so here: http://uk.virginmoneygiving.com/fundraiser-web/fundraiser/showFundraiserProfilePage.action?userUrl=sarahouten

5 Responses to Of ice and men