Of canneries and kings 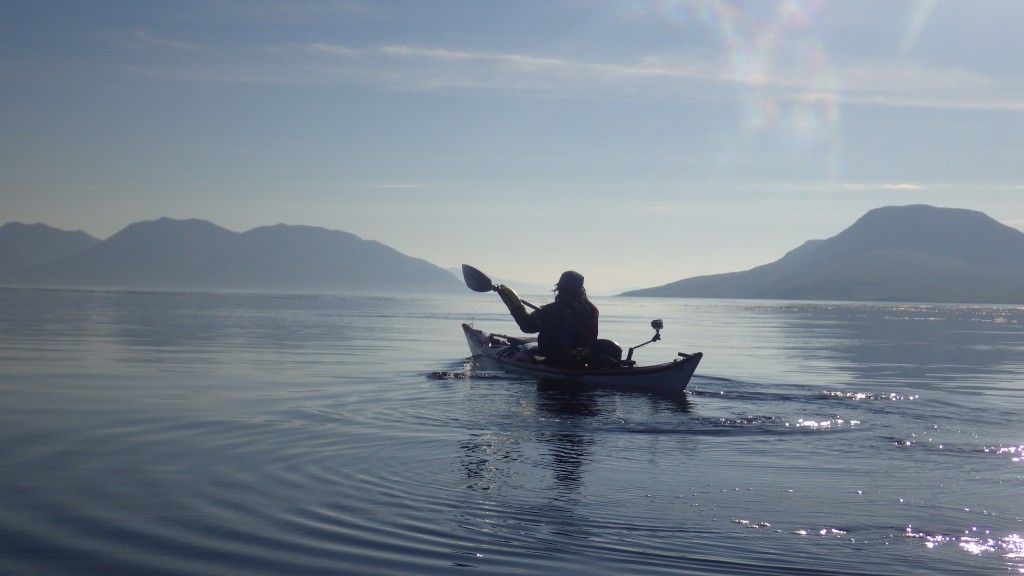 It isn’t often that Justine and I have visitors – normally we are the ones doing the visiting, calling in on communities along our route.  But this afternoon we had our friends from the US Fish and Wildlife Service ship the R.V Tiglax call in and take us onboard for a (delicious) shower and a bag of the most delicious brownies we have ever tasted, cooked by Chef Ryan. Captain Billy Pepper confessed that, at the start of the season when we first contacted him, he would have betted against our chances of success,  but since meeting us way out West six weeks ago before some of the biggest crossings of our journey,  he now says he would bet the other way!  We joked that his earlier quip of, ‘East winds never blow for long out here’  hasn’t happened for us – the southwesterly yesterday was a rare treat as we only ever seem to get easterlies lately. 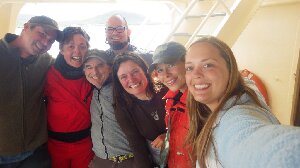 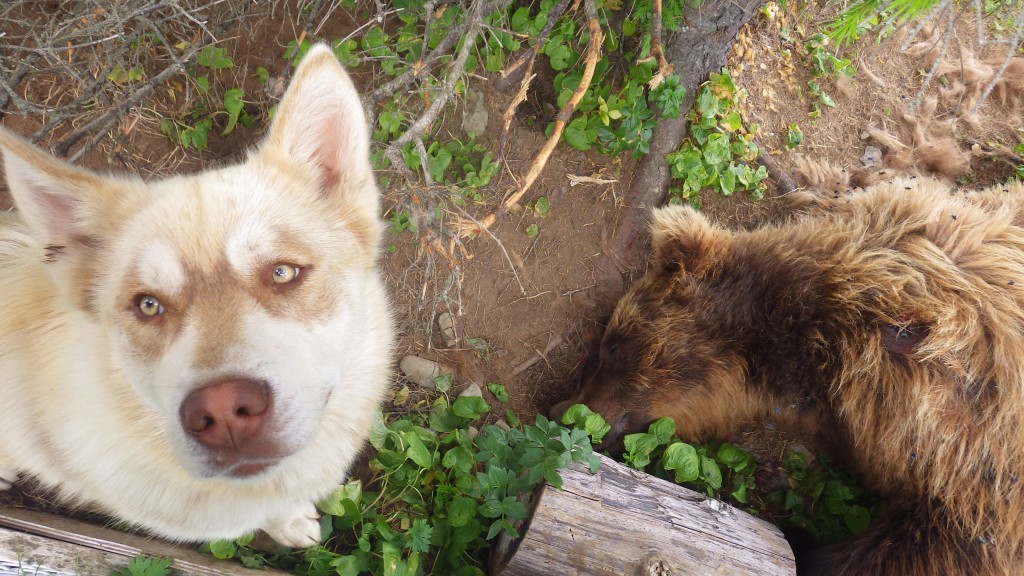 He was certainly handsome and it was a sad and sobering thing to stand beside him.  We heard various tales of the bears and saw signs about town and the surrounding area – mounds of poo, signs warning of bears and a pistol in the back pocket of a father out walking with his family – yet we have only seen two bears since arriving on Unimak Island where ‘the bears start’. It would be great to keep our encounters to the at – a- safe – distance sort as we continue up the coast. 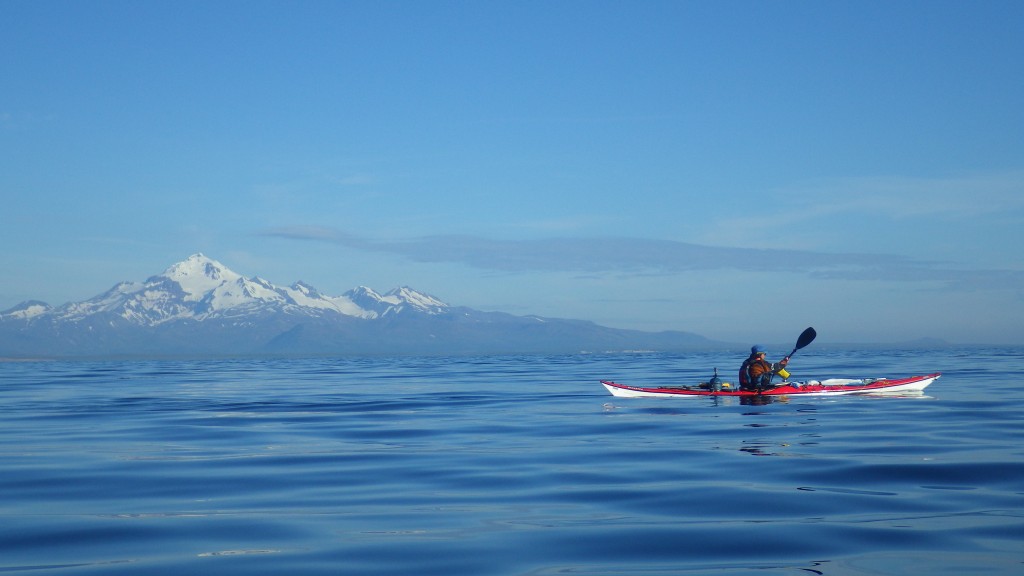 Our local guide in King Cove,  Della Trumble, seemed satisfied with our bear precautions though still recommended we carry a gun – as many folk seem to do. I asked her how the relationship was between bears and people in this community where she has lived most of her life. ‘Do most bears run from people?’ I asked.  ‘No.  It’s the young ones that are so unpredictable – you can never be sure what they will do next.’ Lowering her voice and glancing to her six year old niece in the back of the car,  now busy chattering with Justine, Della told me that her six year old nephew had been killed by a bear some years ago while out with his family. I was glad not to see any while driving on the 19 or so miles of road that run from the town out towards Cold Bay.  We had gone out to look for them from the safety of the car but I was glad they were out of the way of people,  if only at that time. 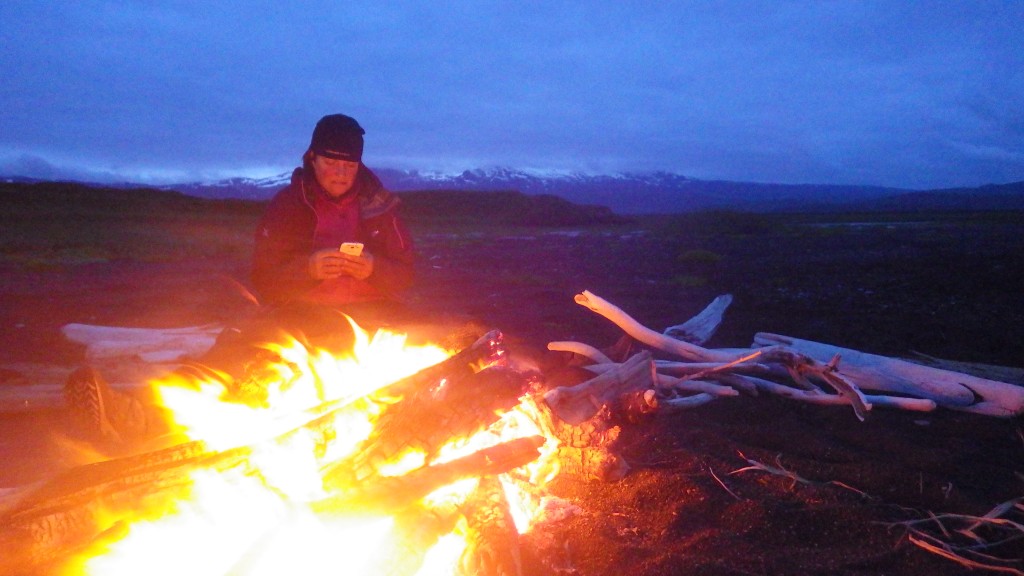 There’s another story – the eight miles of contested road building which would link the end of the road to the neighbouring (relatively tiny) community of Cold Bay and, importantly,  it’s larger runway, allowing critical medical evacuation more safely in all weathers via the road rather than via small plane as happens now. ‘I once watched my daughter’s plane crash just over there and would never wish it on anyone.’ Pointing up to a spot on the mountainside Della told us of another plane which had crashed killing seven on board.       It seems like a no – brainer to me (albeit an outsider) and yet the fight has been going on for three decades, held up over concerns of a tiny few for wildlife and,  I suspect, commercial interest. ‘So,  it’s got to the stage now of suing the US Government, ‘ said Della as we drove. As she recounted the details and her sadness  at giving over  hundreds of acres of their ancestral lands, I noticed a similarity between her and some of our other native Aleut friends whom we have spent time with along the journey.                              They feel marginalised by the government, as though they are fighting to be who they want to be,  living where and how they want to, in the lands of their ancestors. 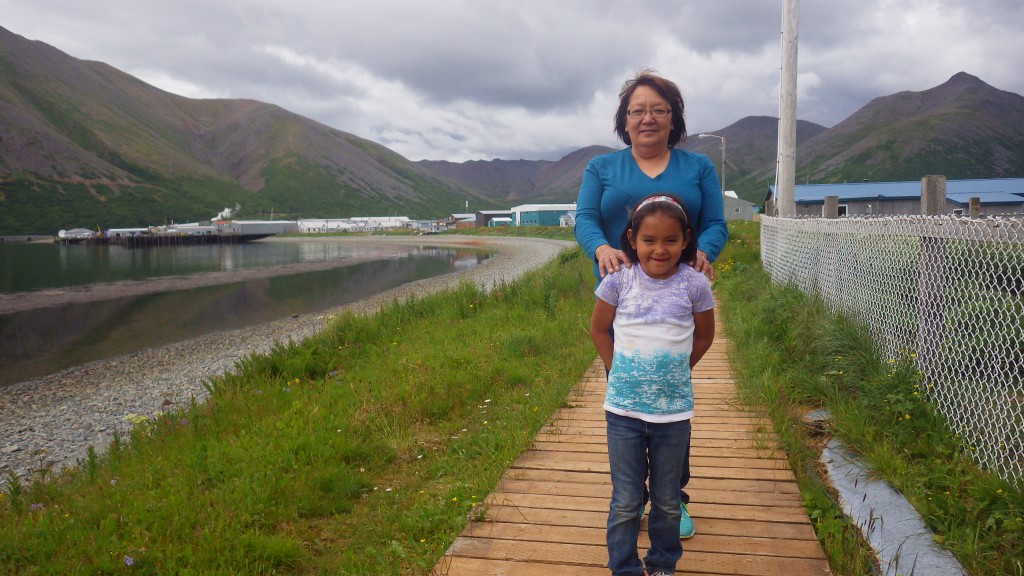 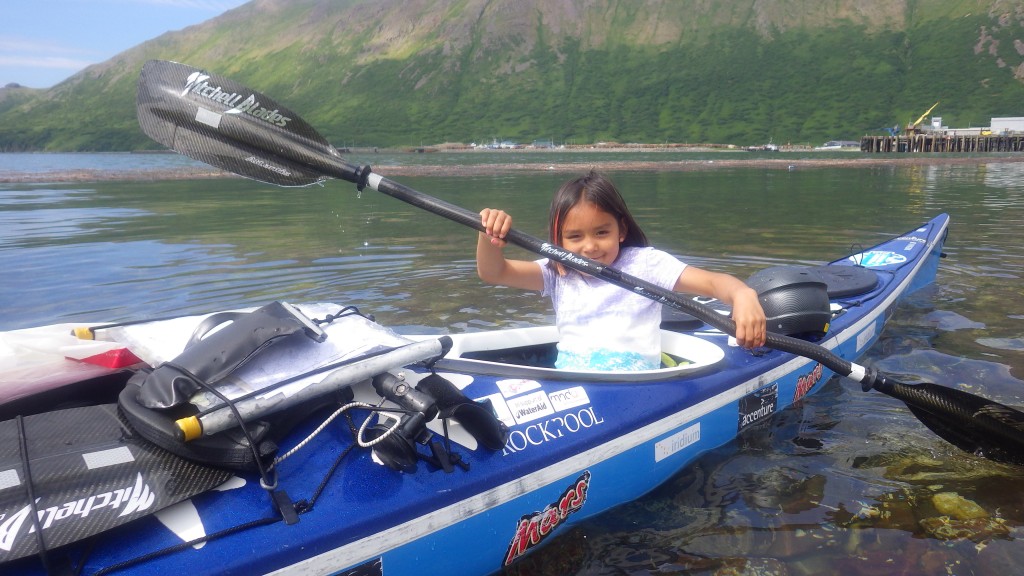 Jader Bear tries out the kayak

During our short stay in Akutan a couple of weeks ago we were given a quick tour around the outside of a fish processing plant,  enough to get a sense of the scale of the operations and the volume of fish  in and out.  In King Cove we got the full show, being treated to a tour of the Peter Pan plant by Site Manager Glen.  ‘My father was Manager back in the sixties and I’ve worked every job in there since. Each of my kids worked there too once they reached sixteen.’ Having spoken to a number of King Cove residents it seems many work there at some point,  especially during school holidays. 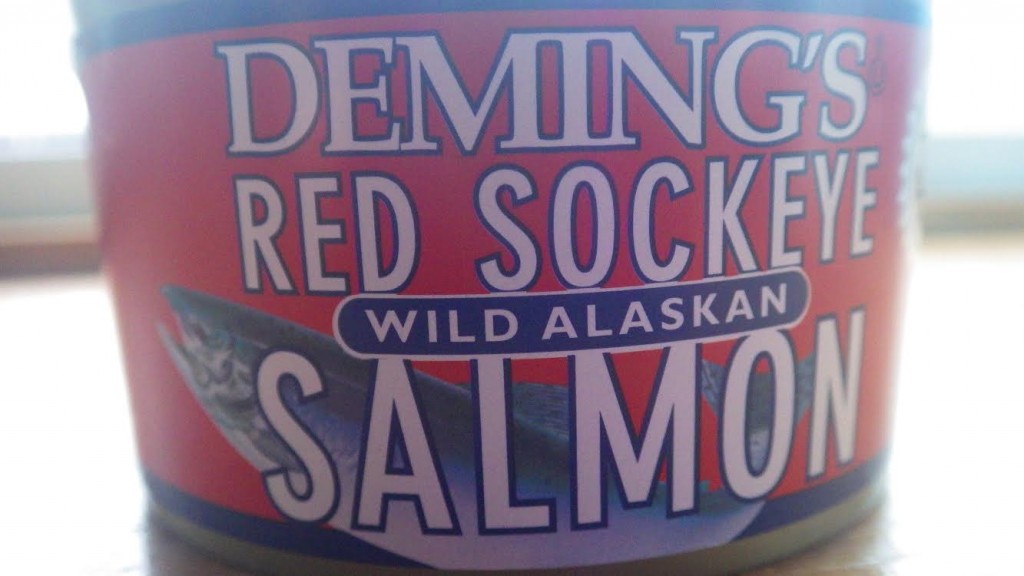 Commercial fishing is big business up here in Alaska

Having seen quite a few fishing boats on our way into King Cove it was interesting and astonishing to see what happened inside. The sheer volume of fish processed and the rate and intensity at which it happens was impressive and frightening all at once. Almost as many migrant workers are brought in as there are permanent King Cove residents in town,  though their shift system of sixteen hour days until the work is done means they could as well be anywhere in the world, so little do they see of outside.                                              Sixty percent are from the Philippines,  thirty Hispanic and the remainder from ‘ all four corners of the world’. Salmon have started running recently so the lines we toured were full of salmon and pollack but they process crab,  halibut and much more besides during the rest of the year. Numbers reeled off Glen’s tongue as he explained what happened and when and by whom, as we threaded this way and that through different rooms of different temperatures between lines of workers in overalls and hair nets,  and my mind boggled at the extrapolations. One that sticks is that out of a maximum of seven salmon lines they were operating two that day, each one pushing out 220 cans a minute of chopped salmon. 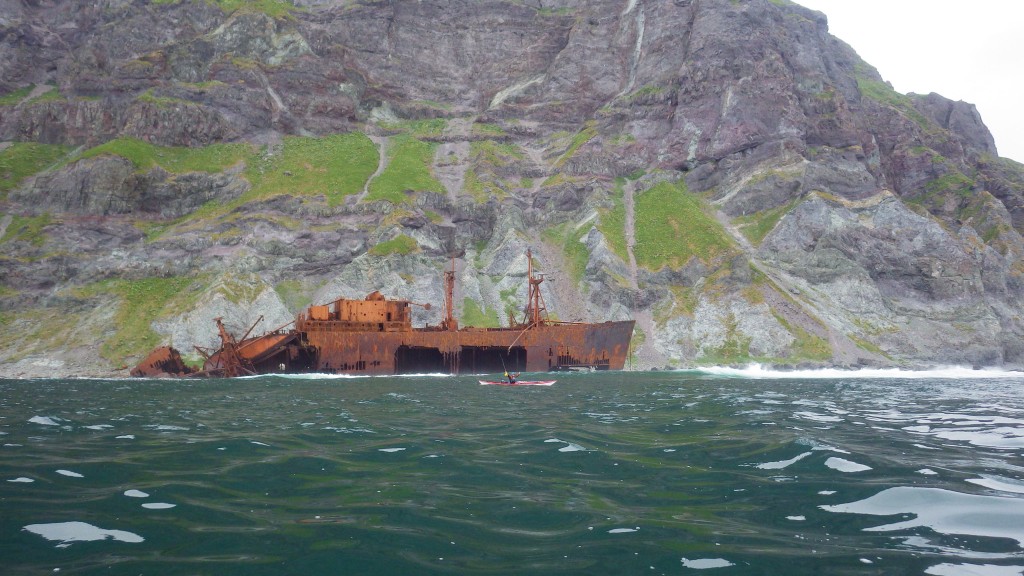 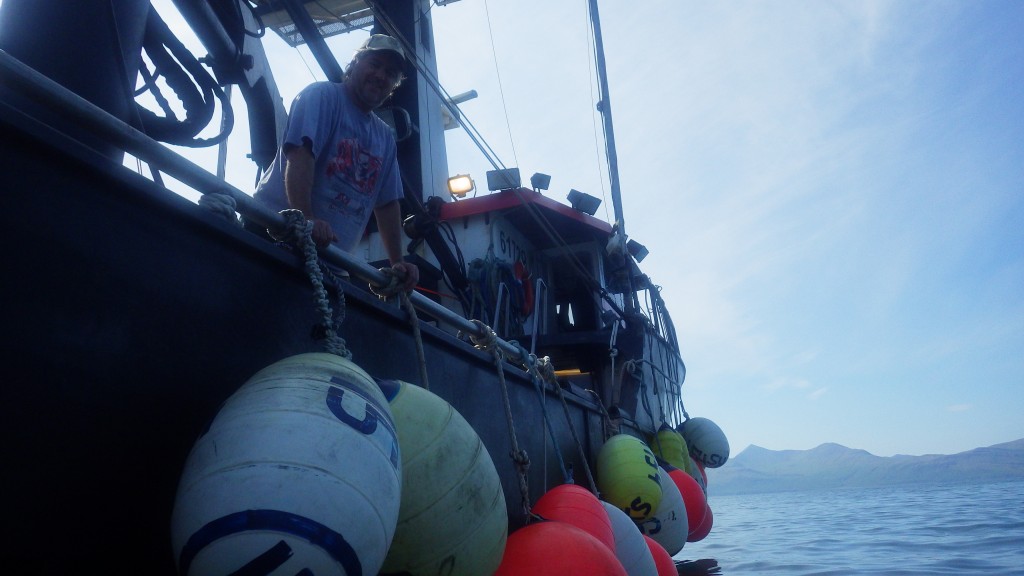 Skipper Kelly on his Tender ‘ Blazer ‘

Stacked on pallets,  there was something like 5850 quarter pound cans per pallet. This plant is owned by Peter Pan,  a subsidiary of a huge Japanese company (which has many varied arms as many Japanese giants do) and the fish ends up all over the world. As a sceptical scientist I had quietly raised eyebrows at the claims on fishy posters on the wall declaring Alaskan seafood to be ‘Naturally abundant.’ I don’t remember the detail of the different regulations of different local fisheries that have been explained to us recently,  but I rather hope it is more sensible than that happening in the E.U. For when you consider that we saw a snapshot  of one single cannery and in Alaska alone there are double figures of them,  the volume of fish being harvested in this region and beyond is frightening. 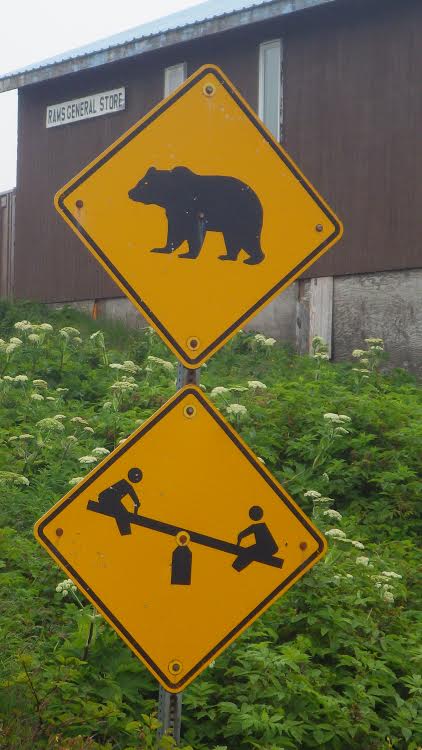 Bears or children – who is the scarier?

Enough of that for now. I know many of your were probably wondering about my wet bottom after my dry suit zip jammed with sand the other week. Happily my newly repaired spare suit was  in Anchorage and the lovely Scott and Debbie Cameron were able to send it on to us, so no more wet bum days for me. 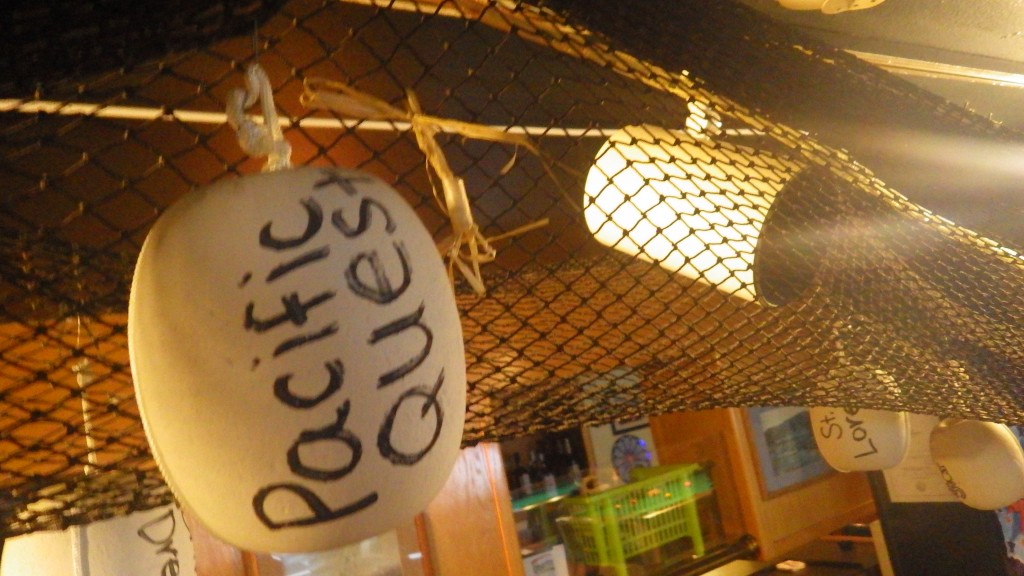 All the boats have a floaty in the bar

Our thanks to Della Trumble and the folks of King Cove and the King Cove Corporation for their support,  to Glen of Peter Pan for the tour and the USFWS crew of Tiglax for the shower and brownies.

If the weather plays  we hope to cross to Unga tomorrow and then on to Popof Island and Sand Point on Friday.

P.s Thanks for the messages re the recent quake up in the Aleutians that made the news.  We were all ok and haven’t felt any shakes at all on the journey.

P.p.s For the questions re bears we keep our  in airtight dry bags in the kayaks,  all of it away from the tent and keep all toiletries out of the tent. We light fires each night and at the moment are camping on offshore islands where there are no bears.

4 Responses to Of canneries and kings