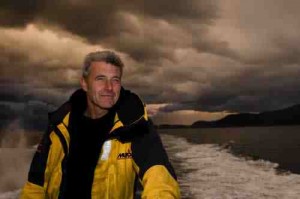 I am just on my way home from a very interesting evening at the Royal Geographical Society (RGS) in London, where I was lucky enough to meet the effervescent explorer and TV presenter Paul Rose. He was giving a lecture on his current BBC 2 series Oceans – recounting tales of his childhood dreaming, through to some of the incredible dives the Oceans team made during the filming of the project. Talk about dream job – the places the team has visited and the things they have seen are awesome, and that’s not a word I often use! Seeing them on Wednesday night’s episode squeezing through narrow gaps into an underwater cave system was both scary and beautiful – the seascape was very surreal but the claustrophobia made me sweat. Give me an ocean rowing boat any day – underwater caves, hmmm… I might need some convincing!

For anyone who hasn’t seen the first two episodes then you have missed a golden opportunity – the first episode showed the team swimming with a group of 30 sperm whales – it was incredible, and the other night they were helping with a project to try and control the proliferation of predatory sea urchins on the once vast, but now diminished, kelp forests off the coast of Tasmania. Cutting edge conservation and lots of enthusiasm and knowledge about the natural history of the oceans, as well as some interesting oceanography and archaeology too. One of the team is grandson of the great Jacques Cousteau – inventor of the sub aqua lung and renowned environmentalist.

Definitely stay in on Wednesday nights – these guys are brilliant telly time.