Not waving but drowning 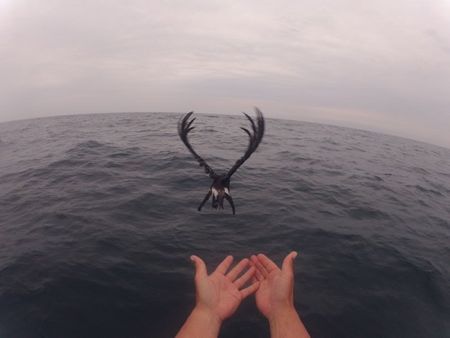 If you need it, seek it

Six months on from being picked up from the North Pacific seems like a good time to talk about the struggle I had on coming home. An ocean of  madness and sadness swamped me and I would like to encourage folk that, ‘It’s OK to ask for help: If you need it, seek it.’

I am an upbeat person, generally positive and  pretty robust.  I like to think I can kick tough times into touch and move on and forwards. This summer and autumn I really struggled and kept the depth and detail of it under wraps as much as possible. Why? Because I wanted to keep up the deep-seated notion that I would head back to sea and, I guess, because there is still an embarrassment, shame perhaps, attached to mental health issues. It felt too like there was an expectation (real or imagined) to move on and forwards more quickly. Why on earth? Who knows at all. There shouldn’t be.  It is normal, often expected and is very, very common.

My life post ocean was a crazy storm. There was the normal ‘culture shock’ of coming home from a 15 month expedition; the double grieving  and sense of loss for my boat Gulliver and my Project Manager; and the huge trauma of that final storm which blanketed itself onto everything. The combined emotion took its toll and for four months rendered me a scared, volatile, depressed and unconfident shell of Sarah O, utterly unlike me. It was a huge effort to maintain ‘face’ and keep enough plates spinning to keep it as under wraps as possible, at first showing the darkness only to those I trusted, and then trying to limit the audience as much as possible. The weeks where I cried almost constantly were a turning point – I had to admit that I wasn’t really coping. I was overwhelmed and finding it hard to stay afloat. I didn’t even want to – such was the depth of fear, pain and confusion.

We all suffer and struggle at times, both to make sense of the world and to find a way forward, to see a way out of depression and darkness – so we should all have the space and support to be able to share that and seek appropriate support  without fear of stigma or judgement.

Having been to some frighteningly low lows this summer I am keen to encourage anyone in that position to be brave and stand up and ask for help, and for anyone near those facing such lows to be brave enough to take an active interest in supporting them.  It is never enough to assume that someone is OK and coping – you need to ask questions and find answers.

Human nature makes it hard to ask for help, hard to expose yourself and your sadness and battles to others, especially when you don’t fully understand it yourself and are often thinking irrationally, whatever you might be portraying to the outside world.  Seek help when you wobble and support those battling tough times, seeking professional help where needed.  Then, once fixed, be open and honest about the difficulties and the solutions and tactics for kicking it into touch – help someone else out of their hole. Some of the most powerful moments in my recovery were hearing some very well respected sponsors and friends of mine tell me of their own battles and sources of strength, and the reminder that nothing will last forever.

I think that in my field of adventuring it often isn’t acknowledged or fully enough – this mad sad stuff –  and having done a couple of big, intense trips myself now and spoken to others in similar situations,  I would say that looking after your head and heart before, during and after a trip is the most important bits of  time that you can invest in. For me, my most important fixer is Dr Briony Nicholls – psychotherapist and friend, but there are plenty of people who helped me get back to the surface this year. Thank you all.

36 Responses to Not waving but drowning