Dare to Do – Taking on the Planet by Bike and Boat (2016, Nicholas Brealey Publishing) -available in paperback, Kindle and audiobook

** Shortlisted for the Wanderlust Adventure Travel Book of the Year 2016 ***

On 1 April 2011, adventurer Sarah Outen set off in her kayak from Tower Bridge for France. Her aim was simple: to circle the globe entirely under her own steam – cycling, kayaking and rowing across Europe, Asia, the Pacific, North America, the Atlantic and eventually home. A year later, Sarah was plucked from the Pacific ocean amid tropical storm Mawar, her boat broken, her spirit even more so. But that wasn’t the end. Despite ill health and depression, giving up was not an option. So Sarah set off once more to finish what she had started, becoming the first woman to row solo from Japan to Alaska, as well as the first woman to row the mid-Pacific from West to East. She kayaked the treacherous Aleutian chain and cycled North America, before setting out on the Atlantic, despite the risk of another row-ending storm…Dare to Do is more than an adventure story. It is a story of the kindness of strangers and the spirit of travel; a story of the raw power of nature, of finding love in unexpected places, and of discovering your inner strength. It is about trying and failing, and trying again, and about how, even when all seems lost, you can find yourself.

Signed copies available to order through Sarah’s site here  and normal ones via Amazon.com and Amazon.co.uk and of course through all good bookshops.

It is very helpful to us if you could leave a review. Thanks! 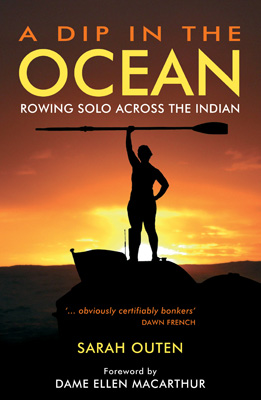 A Dip in the Ocean: Rowing Solo Across the Indian

‘On 1 April 2009, twenty-three-year-old Sarah Outen embarked on an ambitious solo voyage across the Indian Ocean in her rowing boat, Dippers. Powered by the grief of the sudden loss of her father and the determination to live life to the full, Sarah and her tiny boat successfully negotiated wild ocean storms, unexpected encounters with whales and the continuous threat of being capsized by passing container ships.

Along the way she broke two oars and lost 20 kg of bodyweight before arriving in Mauritius. She became the first woman and the youngest person to row solo across the Indian Ocean. Life-affirming, funny and poignant, Sarah’s salty tale of courage and endurance will inspire the taste of adventure in everyone.’

Copies can be bought via the web shop here, through all good book shops and those online beasts Amazon.com and Amazon.co.uk.

Please email hello@sarahouten.com to enquire about bulk buying for your event or see the shop for one off signed copies.