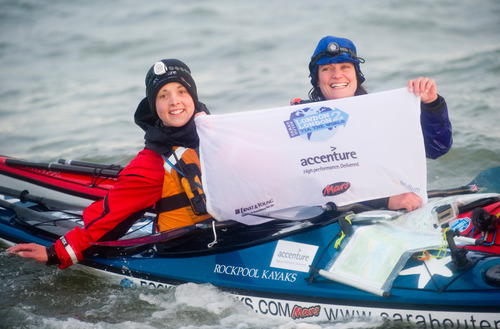 My cheeks are chapped; my neck muscles have a few knots that they didn’t have before and my fingers squeal a bit from blister hot spots when I curl them into a fist – my body knows that it has paddled from London to France. My brain definitely does and it also keeps reminding me that we did it on very little sleep. I have slept for 7 hours already today but know that as soon as my head hits the pillow it will be dreaming again.

I am happy to report that at 0630 today Justine and I paddled in with some dinky surf onto the beach in Calais after 8.5 hours paddling through the night across the English Channel, battling with sleep monsters, cold and more rough stuff than we had hoped for. We had paddled under Tower Bridge in London 65 hours and some 110 nautical miles earlier on Friday lunchtime.

The Channel was tough. Really tough. Full of ships, it is a notoriously busy shipping lane, meaning that we needed an escort boat to trail us – and get in between us and the big cargo ships and ferries honking North and South. It was cold, dark and rather rougher than we expected. Or at least than Justine expected. I hadn’t known what to expect – I was rather tired and a bit spaced out from the effects of an upset tum, just hoping that my insides would behave for the crossing. I wasn’t exactly assured when Justine mentioned, about an hour in, that had she realised just how rough these metre high waves were that she would have veto’d the crossing that night. Having just been slammed side on by a wave that nearly toppled me, I would rather not have heard that. 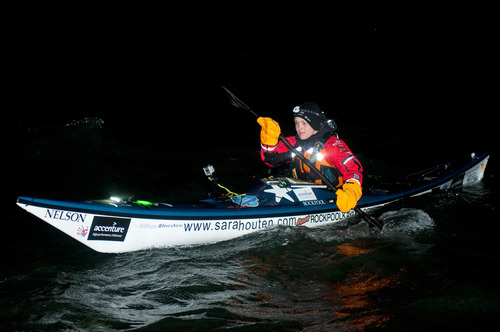 Each hour we rafted up alongside each other to feed and drink, pausing only briefly as the wind was cold and the tide was pushing us further North than we wanted, notching more miles to the log.

Two hours in and I finally felt settled – I was comfortable in the boat, enjoying the challenge of the beam on seas and loving the starscapes. With each hour that passed we got tireder and tireder, alternately descending into ourselves to paddle in silence or singing out aloud to keep ourselves awake. I could only remember school songs and musicals and so resorted to making up songs myself. Anyone on the outside would have thought we were going mad and  Justine’s regular hallucinations would have confirmed that.

After five hours I was really struggling to keep my eyes open and even started questioning which way was up. Our judgement was slowed and at each food break we checked and double checked that the other was OK and that we had resealed hatches correctly.

As the glow of Calais on the horizon slowly turned into blobs of orange and then lights and shadows, I knew that we were on our way to ticking off the first leg of the journey. Then, as the grey dawn broke over the greyer sea, I laughed and hollered and gulped back the tears – I was really on the way now and had just ticked off the first step of the journey.

It has also been wonderful to paddle with Justine – fun, interesting and useful to pick her brains on kayaking and filming matters too. I can’t wait to get back into Nelson and paddle alongside her between Russia and Japan too later this year but, meanwhile, I have some cycling to do… 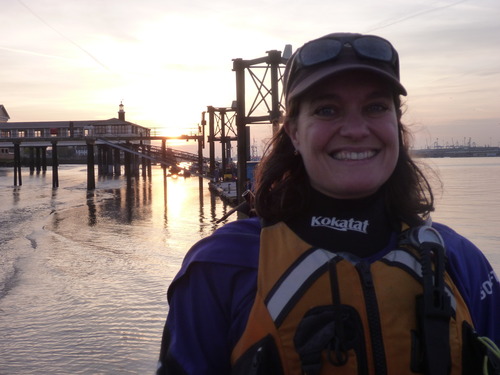 Happy happy days indeed. It has been a wonderful few days, interesting to see how the river profile changes from city to sea, lovely to be out on the water at all hours of the day and night and so satisfying to have overcome the lack of sleep and the cold to make it in safely and still have smiles on our faces.

Hercules and I head East tomorrow, trailed for a few days by Tim, Claire and Justine in the Saab, for the sake of photos and film and checking I have everything I need.

Then it’s just me, the bike and the open road. So now I must sleep, for I have a date with the world.

PS Another big thank you to Royal Temple Yacht Club, Ramsgate for giving us two rooms on Sunday to sleep, rest and and pack in