Over the next couple of years, Sarah will be doing a lot of hard work, physically and mentally as she loops the planet. Hopefully all of you will be sharing in the ups and downs of her trip through everything put on display on this website.

Behind the scenes, however, there is also some work going on. Not as gruelling as rowing across an ocean but not without its own difficulties and every bit as important to the project. My name is Tim Moss and I am one of the Back Stage Crew. My title is Logistics Manager. 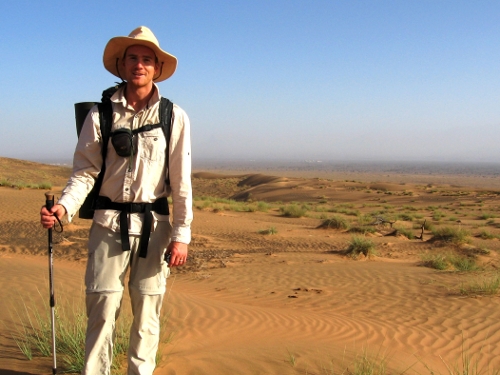 My job is to sort out all of the nuts and bolts for the trip: Getting her kayak shipped to eastern Siberia and her rowing boat to Japan. Drafting procedures for emergency situations and carrying a pager for two years in case one should arise. Finding out what paddling conditions are like in the Tatar Straits in September and from whom she needs permission to kayak from Sakhalin to Hokkaido. And, more importantly, where on earth are all of these places?

Such tasks are rarely straightforward and frequently frustrating but also invariably interesting and almost always an enjoyable challenge. I don’t think there is a person in the world that could call themselves an expert in all of these fields but, thankfully, I do have a little experience with this sort of thing. I spent a couple of years organising large Arctic expeditions for the British Schools Exploring Society, having previously run a couple of my own mountaineering trips to the Greater Ranges. I then went freelance and set up my own website and company The Next Challenge with the aim of encouraging and supporting anyone looking for an adventure. Whatever the scale. Some have been big, like the Women’s Commonwealth Antarctic Expedition I supported in 2009, and many have been smaller, like cycling Lands End to John O’Groats and trying to get more out of your lunchbreak.

Working with Sarah for the last year, my main focus has been on what has become known as: “The Far Eastern Question”. Essentially, how does she get from Russia to Japan? It’s too far to kayak in a day but using the big, cumbersome rowing boat would be overkill; a lot of logistics, hard work and danger in those waters for such a short trip. I flew to the Russian Far East last September to solve this question and the short answer is: “Sakhalin Island”. The full story will become apparent in time.

If the last twelve months of preparation have been anything to go by, this is set to be an exciting adventure. We’ll do our best behind the scenes to keep things running smoothly and I hope you enjoy the show.

You can read more about Tim’s adventures and get help with an adventure of your own through his website www.thenextchallenge.org

One Response to Introducing the Logistics Manager: Tim Moss