It’s not even winter yet… 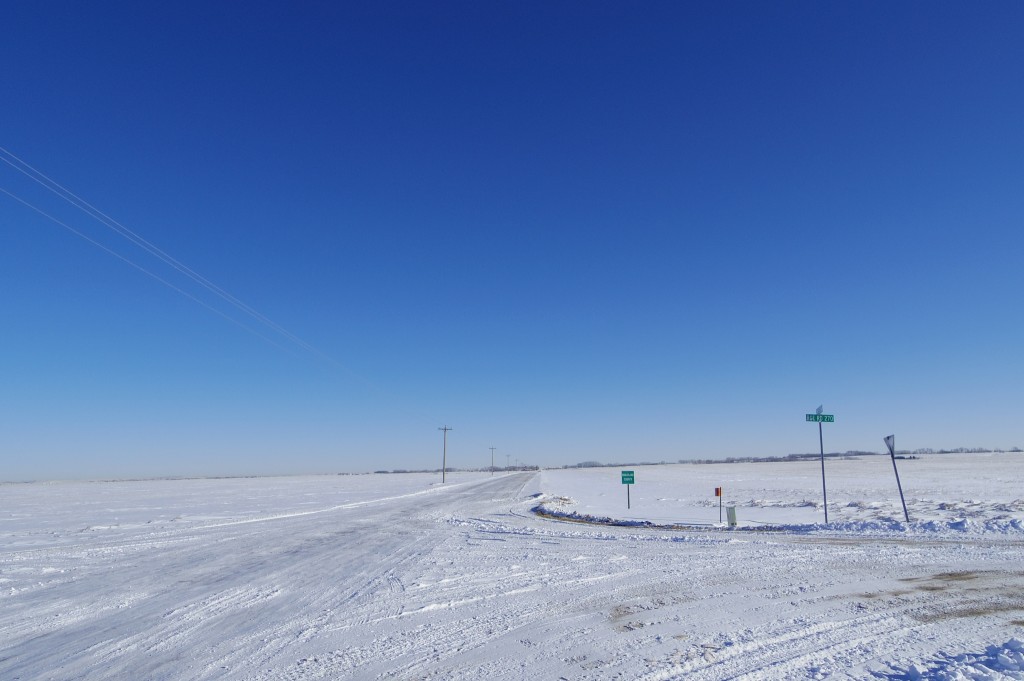 Chilly has come to take on a whole new meaning lately as Lucy is plunged into the Canadian subzero temps during her first week on the road and my ‘record’ reaches new lows with a run of minus 30s and minus 40. It is still novel and exciting for the most part but it has been a bit frightening too. It is frightening to see just how quickly things freeze and how mind and body and bike slow in the (really) cold stuff, and know that there is more of it ahead and that frozen digits or bits of face would be really annoying (amongst other things). So far Luce and I have both agreed that this might count as ‘polar’ enough for us when out in the cold, though now I type this from the warmth of indoors I find myself dreaming of beautiful snowscapes of those permanently snowy climes and thinking it would still be an awesome place to visit. The funniest thing is that a seven year old pointed out that it isn’t even officially winter yet… 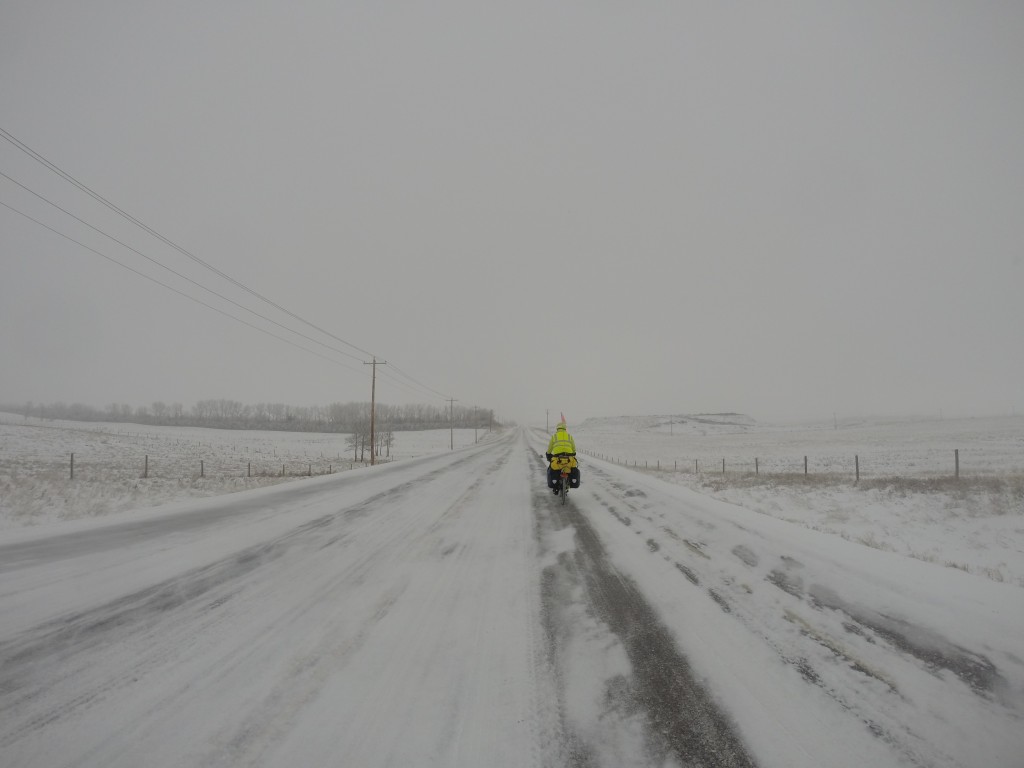 Lucy’s first day on the road

Snuggled into our sleeping bags with hoods cinched round our faces and Buffs over every bit of exposed cheek and nose on her second night in the tent, Lucy turned to me and said ‘What are we doing?” after the circus of going for a tent pee (in a saucepan) and then getting back into the sleeping bags as quickly as possible. We both burst into giggles. A snowstorm was raging outside and drifts building around the various buildings of ‘Larry from the Prairie’s’ house that we could see from our tiny tent window. Even with both inner doors open and the outer vents open we still had our very own crystalline wall paper inside, showering us with hoar frost each time either of us sat up or knocked the tent wall.

For this is what adventure is all about – that heady mix of excitement, discomfort, challenge, satisfaction, new experiences and generally figuring things out. We have certainly been doing that in our first week of cycling together – not only for the fact it is Lucy’s first time cycle touring but also for the timely arrival of a cold snap. A very cold one, in fact. 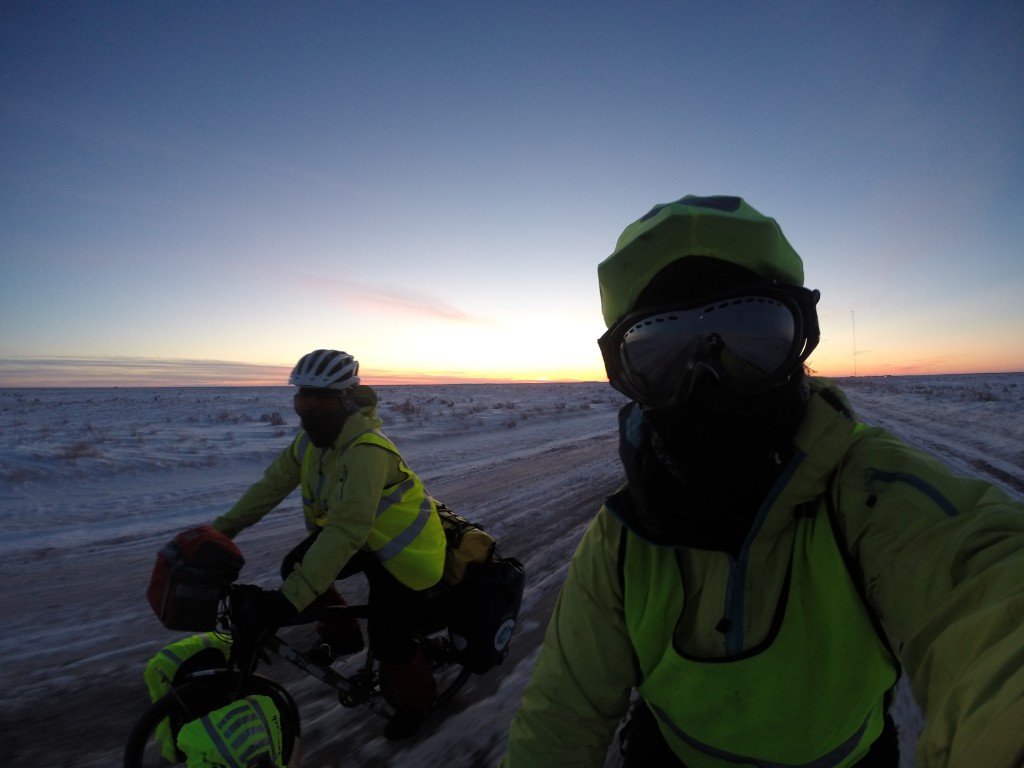 On our first day we pedalled for a couple of hours (not very far) into freezing rain and biting winds on snowy, yucky roads. I am glad we turned down the offer of staying inside at the house we knocked on in favour of trying out our new tent, for the next morning when we went in to make breakfast, we discovered it was full of discarded beer bottles and mouse poo. The owner (a truck company boss) and his colleagues clearly just use it as a drinking den. Our second day saw us venture out for a couple of hours to pedal a couple of kilometres in a snow storm on even snowier, yuckier roads. We camped next to “Larry from the Prairie’s’ house to escape the wind and woke to brilliant sun and freeze-your-wotsits-off weather the following morning. The irony is that it took us longer to pack up and get ready and then unpack and set up camp each day than we did pedalling for the first few days. Everything takes longer in the cold. Everything breaks, too. 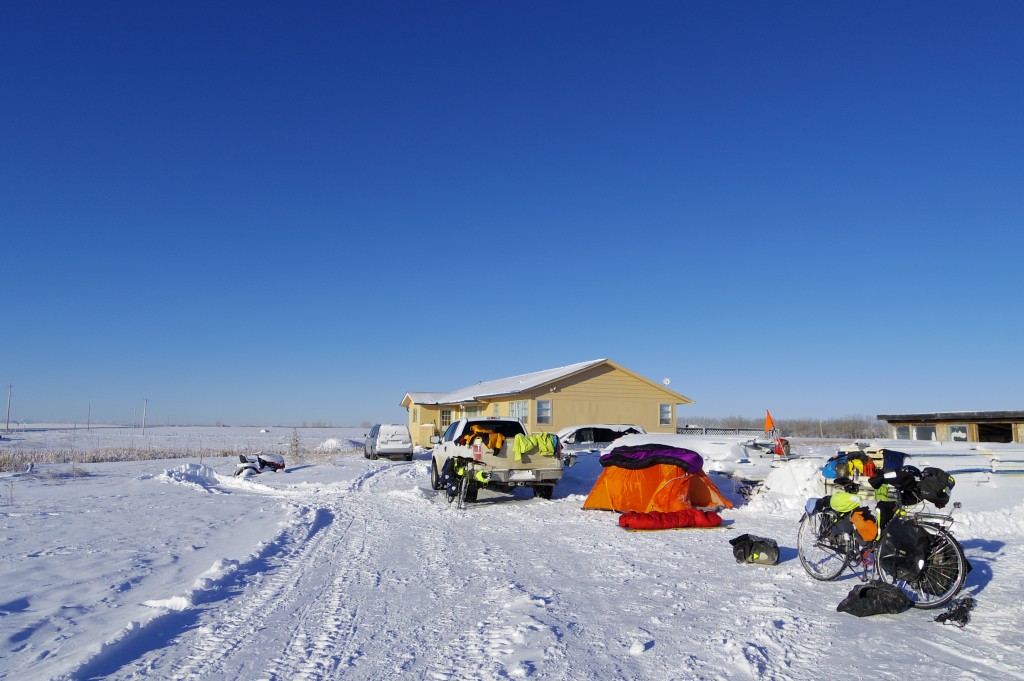 Camped outside Wei-Fung’s house was a chilly experience

I cursed the stove on our third evening when it decided to stop working part way through boiling water for the pasta. As the mercury slid towards 30 below I was to be heard shouting naughty words and dancing around trying to warm up my fingers as I tried to get it going again. Lucy sat in the tent sobbing at the overwhelming emotion of those first few days of an expedition, paralysed by the cold and said emotion into a teary camper. You can imagine the relief of both of us when we closed the door on the razor-like cold and tucked into a steaming pan of pasta, wrapped in our sleeping bags and hugs – suddenly everything felt better again once the toes came back to life. It has been a week of learning, that’s for sure. 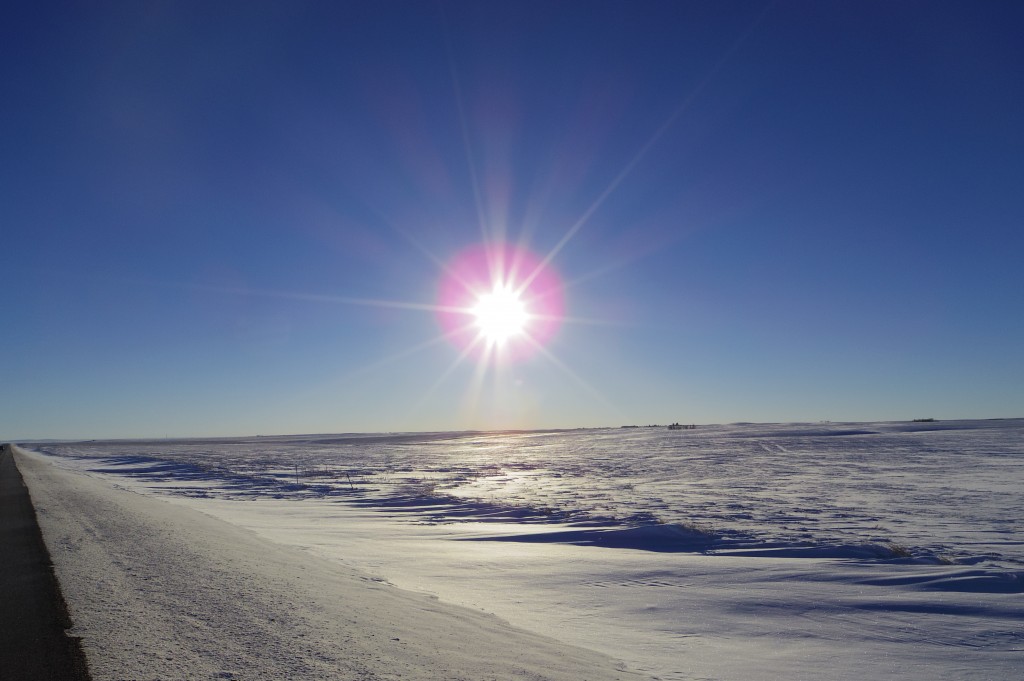 A week of beauty, too, even on those ridiculously cold days. Bright blue skies and brilliant sunshine turning snowscapes sparkly and then pink and orange at sundown. Riding under an almost-full moon, watched by Orion and pals on a quiet night and seeing the Rocky mountains way off on the horizon, turn purple across the skyline in the morning sun. Someone told me that the Prairies would be boring, but I think their mind must be a boring place for it has been anything but, and it is far more varied than he would have led me believe. We have met curious ponies and cows with ice moustaches, watched coyotes and foxes trot over snowy fields, and been chased down the road by enthusiastic dogs with a mixed up death-wish-cum-hunger-for-cyclists. We even saw some llamas (or they might have been alpacas) looking as out of place as we did.

As ever, the people we have met will become etched into our memories. From Larry who declared us the ‘most hardcore people he had ever met’ to the laughing, wide eyed Wei-Fung who seemed incredulous that we wanted to camp outside her house at -30, and then even more so when she found out we had survived the night! The car drivers who toot their horns in support… and the train driver who did the same…. and even more car drivers who turn their heads in disbelief at seeing two begoggled wrapped up biking things headed along snowy roads. 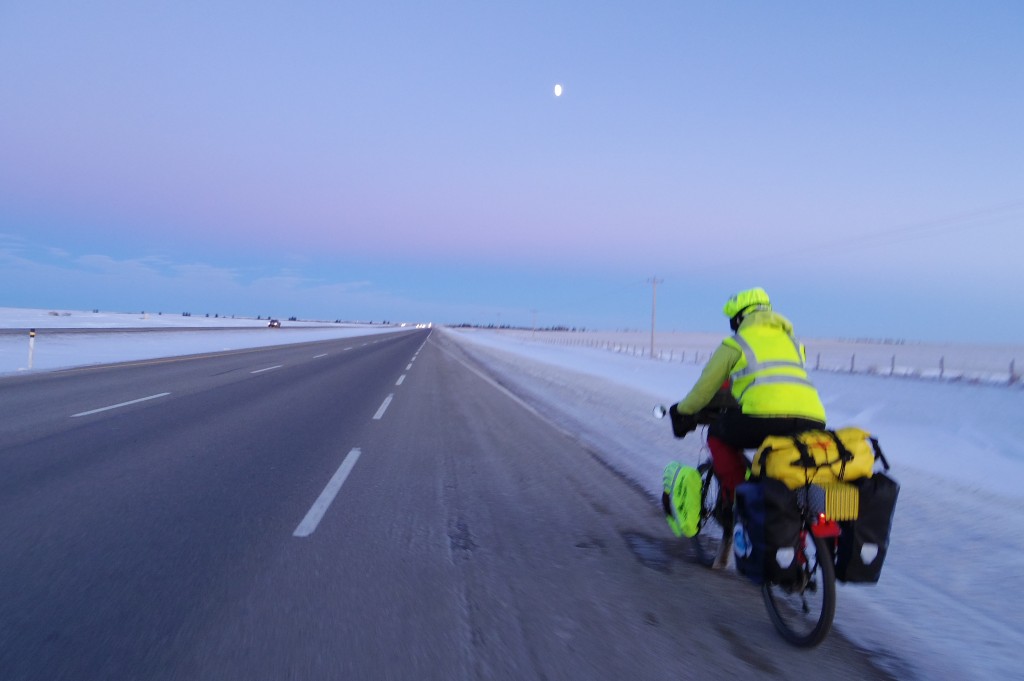 Hooray for the moon

There was Mike and Mikaela and their hatch of 2-week old beagle pups. Not only did we camp in their garden (we would have slept inside were it not for Allergy Features here) but they plugged in a heater for our tent overnight and brought us a bag of delicious home made food, bread and fruit for supper. Heroes indeed.

And then the community of Hussar – a small village of 180 something residents that we pedalled into one night. We were invited to go and watch the ice hockey training in a stadium that they had fundraised for over a decade and built themselves. Once there, a gentleman footed our bill without us knowing, while others chatted with us about anything and everything and invited us to sleep inside. With our tent already pitched outside we opted for the latter before going into the school the next morning to listen to the 50 studentsbelt out their School song and give them a talk on the journey. We pedalled out of Hussar with big grins on our faces and fire in our legs, snippets of the Hussar school song ringing  in our heads over coming days. 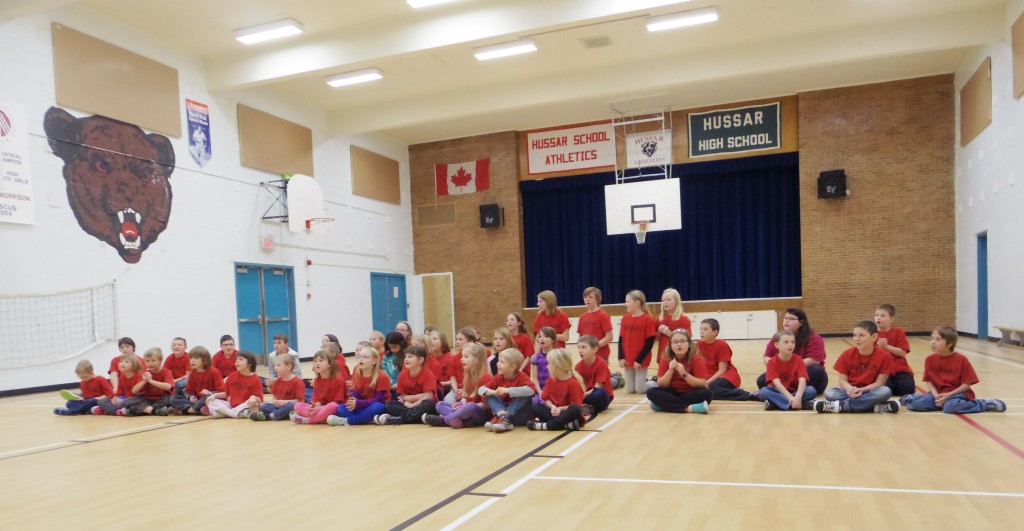 I always think that the first week (or more) of a trip is about settling in, and to me it really feels like Lucy has settled in this week, every day being a bit more comfortable with life on the road, in the cold, on a bike. I have had three months to get used to it and she has been parachuted right into the (chilly) cauldron. I am so happy she is out here – having each other to look after and to be looked after by the other is such a good focus. Most of all though it is about sharing in the journey together. Hugging out the tough stuff, making each other giggle all the time, and just being together – everything feels easier and lighter as a duo and I love it. I am really grateful to my sponsors for agreeing to let Lucy join in with this phase and am as happy as a llama in the snow. 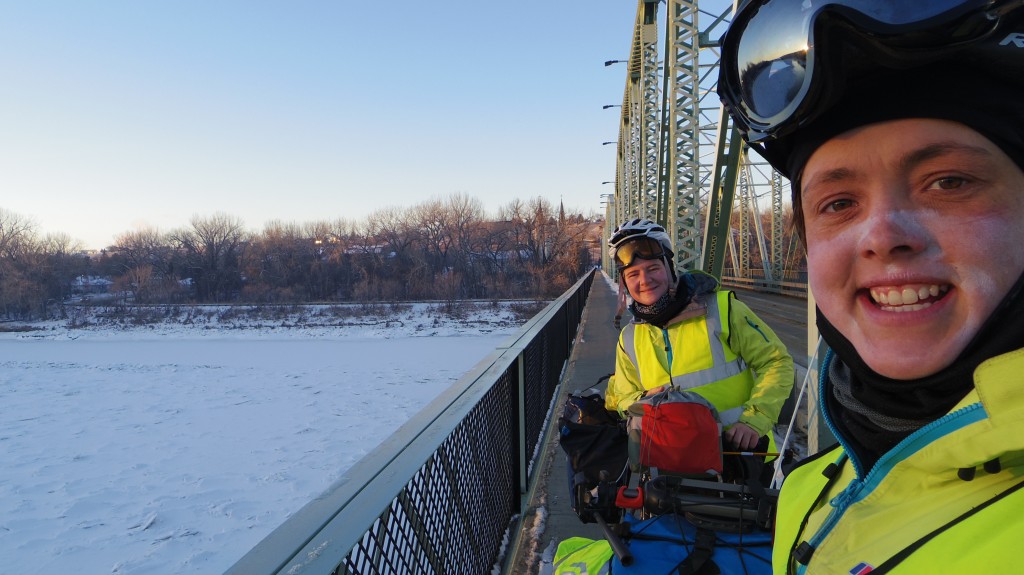 As much as we are loving the novelty, beauty, misery and learnings of life in the really cold stuff, we are both pretty excited by the idea of warmer temperatures this next week with the arrival of a Chinook ( a warm air system sweeping in from the Pacific). Temperatures are forecast to go above zero, even during the nights. Wooop woop and wooop!

P.S Thanks to everyone who has donated to the L2L Charities recently. Please consider doing the same at: http://uk.virginmoneygiving.com/fundraiser-web/fundraiser/showFundraiserProfilePage.action?userUrl=sarahouten

15 Responses to It’s not even winter yet…