It’s Better On Your Own

I’m standing with my feet on the passenger seat, leaning over the roof of a moving car and staring through the view finder of an SLR camera at a cyclist pedalling behind me through the French countryside. Just one of a number of duties conducted whilst supporting Sarah at the start of her cycle across Eurasia last week. Other tasks included feeding fish with last night’s dinner during a Channel crossing and skinning my toes running barefoot after Sarah’s bike but we won’t go into that now… 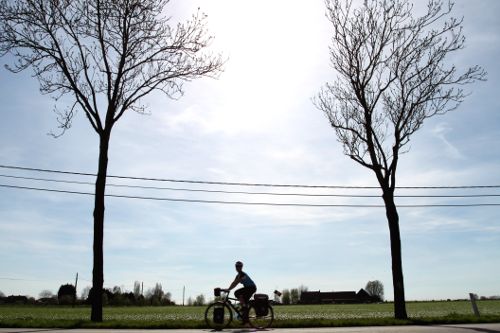 Two of us manned a car whilst the other one cycled with Sarah. The primary aim was to collect video footage and stills  but, of course, being followed in a car whilst cycle-touring has other advantages: We could pick up food for tea, locate CR2302 batteries without wasting precious time in the saddle and negotiate camping space with Belgian farmers in advance of Sarah’s arrival. And, sometimes, we could hang out of car windows to take nice photographs.

I think having this kind of support for the first few days probably provided a nice, gradual transition away from the comforts of modern living and into the hardships of life on the road. She has many months of human-powered travel ahead of her and it is a world away from the creature comforts of every day life which most of us take for granted.

If it were me on the bike though, I would have been looking forward to being on my own. 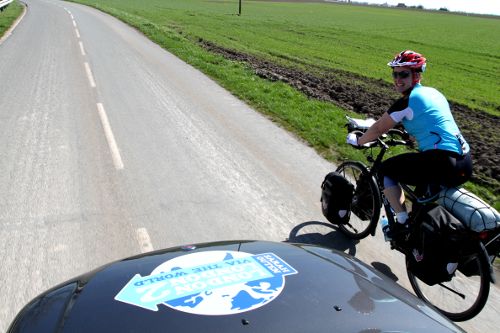 Life on expeditions may be hard but it is also simple and that is one of its beauties. Having a car and a support team may make some things easier but it’s also a lot more complicated: Having to plan in advance an intricate route, dealing with the extra hassles that come with better connections to the outside world and simply being reliant upon someone else. Going it alone you can be entirely self-sufficient and need plan only as far as the next turning if that’s what you want.

Sarah has a team, of which I am a member, that work behind the scenes to organise this project but the rest of the physical endeavour is done on her own. Cycling to eastern Russia and rowing across the North Pacific she will be alone, powered by her own arms and legs, carrying her own supplies and relying on her own willpower. Travelling in this style undoubtedly requires significantly more effort than a fully supported journey but few are those who choose expeditions for their ease, and the simplicity attained through this approach, in my opinion, is at the very core of adventurous travel.

So, in the nicest possible way, Sarah, I was very happy to see you carry on without us last Friday because I knew that it is what you had set out to do and whilst it may be tougher without helping hands, it will be all the more rewarding for it.

5 Responses to It’s Better On Your Own