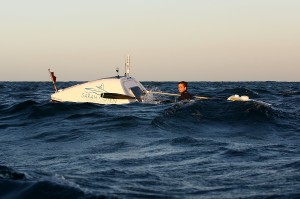 irst there was a ‘Warm Up Lap’ in which I spent eleven  days at sea, looping a massive 400 mile loop from Fremantle, Australia right back to Fremantle, Australia. The weather had conspired against me and the mighty Leeuwin current tested me. I started again on April 1st 2009. Failure isn’t failure if you learn some useful lessons.

It took me 124 days in my little custom-made rowing boat ‘Dippers’ to cover the 3,100 nauties (nautical miles) to Mauritius, arriving in time for tea on August 3rd after the most incredible adventures of my life. They were some of the most challenging times too, with mid ocean storms, capsizes, encounters with whales and a continuous bid to avoid squashing by container ships. I surfed with albatrosses, passed the time of day with my very own troupe of Pilot fish who escorted me across and was treated to incredible sunsets and sunrises.

It was during this Indian Ocean row that I dreamed up London2London:Via the World.

The tracker – where on earth was sarah?