I was lying on my bunk, head near the open hatch and enjoying the warm air as I read. A clicking sound. Hmm. What was it? I cast my eyes about the cabin, couldn’t see anything obvious and so returned to my book. It kept clicking at different speeds and volumes and I wondered if it was air trying to escape from my water bottles. I checked them and it wasn’t. I carried on reading. Twenty minutes later I thought I should pop outside and see if anything obvious was the culprit. 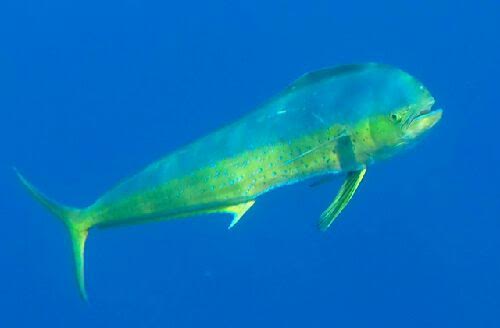 One of two exquisite doradoes on sentry beneath my boat. Not in the least interested in my hooks so a purely visual feast.

Moving water, louder clicking and dark shapes made me look to the side of the boat. Yes, there was the noise and very obvious too. 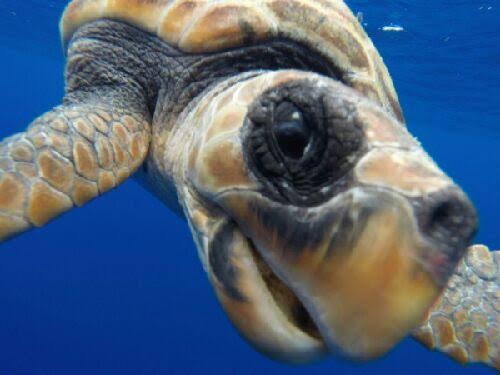 Happy socks and I were being checked out by sperm whales, just ten meters off the starboard side. I was one huge grin as I watched, listened and filmed and photographed them for the next half an hour and they watched me back, between rolling over and over as though playing. Showing their pale undersides as they did so, in contrast to the wrinkly brown grey upper side. Sperm whales are very easy to identify. A teeny excuse of dorsal fins sits well back and various smooth undulations continue down to the tail. They have almost no flippers to talk of (compared to the long huggable one of the humpback, for example) and their head is a bulbous blunt oblong. 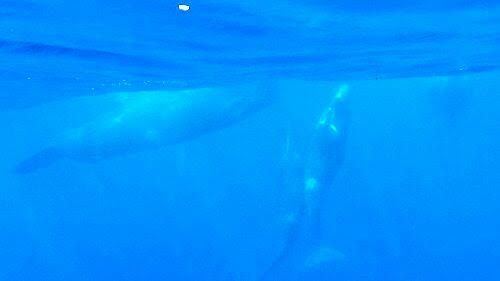 I have never seen whales spyhop before, but this crew did it regularly, their oblong heads poking up like periscopes so they could see me, showing their unlikely positioned slit of a blow hole very clearly on top of their heads. I could see their narrow lower jaw reaching down their head and wondered at the size of the teeth inside, sperm whales being one of the few big toothed whales. The noise they emitted was incredible – a steady purr of clicks, clearly audible even out of the water. I listening back on my GoPro underwater footage later, it was louder still. 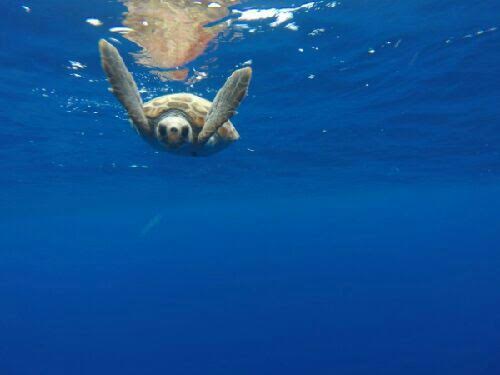 Me: ‘What do you want to be when you grow up?’
Sea turtle: ‘A skydiver. Look, I practice all the time.’

My instinct was that bull sperm whales were mostly solitary unless breeding, and my DK guide confirmed this afterwards. Given that the two whales were bigger than the others, I reckon they were a group of mothers and calves, with the largest whales about 10-11 meters at a rough guess. In the distance I saw more distinctive forward pointing blows, suggesting more sperm whales in the area – so perhaps they were part of a larger group. 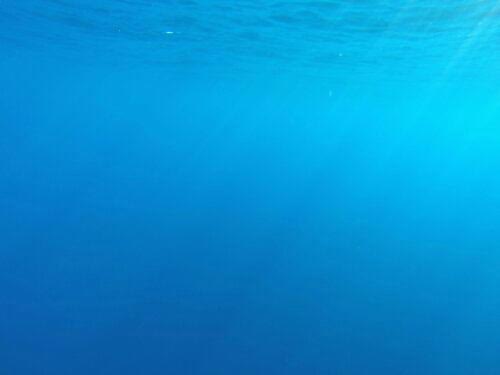 My favourite colour on the planet. Looking down into the deep ocean. Calm. Bright. Exciting. Alive. It speaks to the soul.

Moby Dick was a sperm whale and I have heard of another instance of a boat being holed by a sperm whale in modern times, so quickly I closed the hatches, even though they seemed peaceful in their lolling and rolling and spyhopping. That said, a couple of hundred years ago they were prized by whalers for the quality and quantity of fine spermaceti (the waxy fluid in their head) and beasts like that would have been talked of in terms of barrels of oil they would yield rather than length. So I don’t blame Moby Dick or his actual real life muse for their attacks. Humans have done far more damage to whale populations than vice versa.

Dolphins! I was going to get in the water with them when I noticed a trail of dolphin poo and decided against it.

Sperm whales are, I believe, the deepest diving marine mammal on the planet. Able to hold their breath for up to two hours at a time as they head into the dark to go food shopping, squashing their lungs to a ridiculous fraction of their normal volume and slowing their hearts right down to redirect blood flow to vital organs. Record dives are some 3,000 metres. Awesome, awesome awesome. I remember being in awe as I learned about them and their deep diving counterparts in a tutorial at university and today I had the biology lesson of a lifetime The ultimate practical observation session as these majestic beasts did the same to me and my little boat. The watcher became the watched and all that.

One of my favourite fish. A dorado. From above she sports a striking blue stripe – a Mohawk of sorts. Beautiful to watch.

The close up, often fleeting encounters with wildlife in their own habitat is one of the main reasons I love to explore this planet. That half hour spent with the sperm whales today more than made up for this recent week of going nowhere or backwards. I’d be happy to do it again and again for another meeting like that.