I think this part of the ocean must really like Happy Socks because once again, just miles after passing ‘Our Furthest Point East’, we are back on the anchor in an easterly wind. The anchor went out at eleven or so, just after I had returned to the oars after a break. I had broken a new trip record and got onto the oars at 5am, rowing through to 8am, with a few stops for some plankton netting (more on this another time).

Thankfully it isn’t forecast to be too strong so I should be able to get outside enough to stop me getting too cabin feverish and to stretch my muscles.

Compared to the weather that Gulliver and I were waiting for on this date last year, a few days of not-too-boucny east wind seems like a holiday. For on exactly this date last year ‘Rosie’ (Tropical Storm Mawar) was on her way. I had prepared the boat as best I could – tying things down, bringing my survival suit and gear into my cabin and prepared my mind as best I could too. Trying to think of cues that might calm me and help me stay positive, I wrote ‘Smile’ on one hand and ‘Breathe’ on the other. Smile and breathe…smile and breathe. Over the next 3 days I learned just how difficult it is to force a smile when you are petrified.

Hmm. I wonder where Gulliver is now and which way up he is. I hope he’s providing some good refuge for tired birds and know that his underside will have the most magnificent barnacle and weed beard ever. I do look out across the waves and wonder sometimes what it would feel like to see him again  – golly… And imagine how mad it would be if we actually ran into him on this voyage. 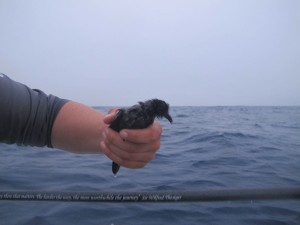 In other news, following on from yesterday’s squid rescue, today’s rescued were two tiny petrels. I heard them scrabbling when I woke at 2am and left them until I had finished my wake up and email routine and the black night had become grey dawn at half four. Once again – as with last year’s bird releases – there was a sense of irony that these fragile looking wisps of life were actually far better equipped for sea life than I. That said, I do wish I had patted them dry with a towel first before sending them on their way as they looked rather bedraggled.

And for now I shall return to the wonders of the Bach Magnificat. I shall imagine as I listen that I am in some vast cathedral, bathed in cool air and soft light, wallowing in the sounds, rather than sweating it out on my sheepskin in my teeny tiny capsule cabin, half lit by LEDs and the glow of my instrument panel, dropped crumbs sticking to my skin and today’s damp shorts just moments from my face. As I said, it’s a rock n’ roll lifestyle I lead out here J

PS. I think the petrels were Leech’s or Wilson’s.

PPS. Here’s the donation link to the L2L charities – much appreciated if you are enjoying this blog and care to pop a few pennies or pounds that way http://uk.virginmoneygiving.com/SarahOuten

Roz Savage: Ahah – Peace Boat. I know them. We had some Peace Boat volunteers working in Ishinomaki when I was up there with Its Not Just Mud, post-tsunami. Hope all good with you!

Bruce Ellen : I see rubbish out here every day, but nothing so far that I could positively identify as having come from Japan’s tsunami in 2011. Last year I saw lots of big buoys  which may have – who knows. Debris has been tracked all the way from Alaska to California to Hawaii and everywhere in between, I believe.

Richard Harris: I drained the locker most of the way and then picked the squid out with a large peg (very gently, of course)