Yesterday was my second birthday at sea alone in a rowing boat – I turned 24 on my voyage across the Indian in 2009. It was a grand day with sunny blue skies, surfing seas, gifts of cosy socks and a dragon and a birthday badge. 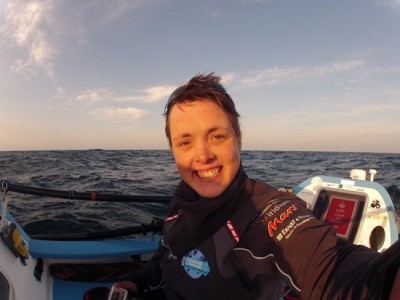 My good pal Claire stashed two hip-flasks of delicious homemade liquor and various folks gave chocolate – obviously having read about my disappointment in 2009 when I opened a necklace having been convinced (and excited!) that the package  was chocolate eggs.  I even have some balloons which I shall inflate in a few hours (it is currently 2am) and a banner which is now sparkling down one side of my cabin. Having procrastinated with the opening of my cards until after dinner I decided my birthday ought to be spread over a few days and having felt a little off-colour the past couple of nights I postponed the alcohol too, though I have chosen it already. I shall have one of the two bottles of Cornish cider, saving the bottle of Pol Roger for the international date line, which will signify  the ‘half way back home’ mark. Goodness knows when I shall get there with my current tracker knitting…

A friend in Japan had put together a birthday meal for me before I left – curry and make-your-own-naan – which provided a very happy diversion. Note to all ocean rowers and expeditioners – make na’an! Said friend got together with my Tokyo pals for a Birthday Ginner in my honour (Ginner being ‘Gin and Dinner’) including a special birthday cake. Thank you folks – honoured indeed.

This time last year I was a newbie to Kazakhstan, arriving over the border from Russia just the day before. I slept on a dried lake and then pedalled 212km through the dusty heat to Atyrau to stay with expats Rowena and Matt.  I arrived late but not too late to sink a few   birthday beers with Matt and some pals who were in the midst of building a hovercraft, of all things. A bit of a contrast to today in all respects but for the fact I am happy and feel very lucky to have such wonderful pals the world over.

Thanks to everyone who has donated to my charities in honour of this 2.7 decades old lark  – it is much appreciated. Do swing buy and throw a token or two in if you can. We are nicely on our way to £12,000 (excluding GiftAid), a healthy sum indeed.

PS A huge sigh of relief came the other day as with a bit of medicine the ipod revived and ousted the silence once more. No hymns for a while yet.

PPS Expect some more tracker knitting this week as a typhoon to the south of us blows in a few days of easterly winds.