Things are done differently in Bush Alaska, it seems – the generic description of that non-defined area of communities way out wherever, further from the madding crowd than the Alaskan cities and their surrounds. The rules are different. Life more flexible. It has to be. The seasons and the distances and the lack of people and resources means, it seems, that there is a certain element of ‘rolling with it’. Making do and figuring out. 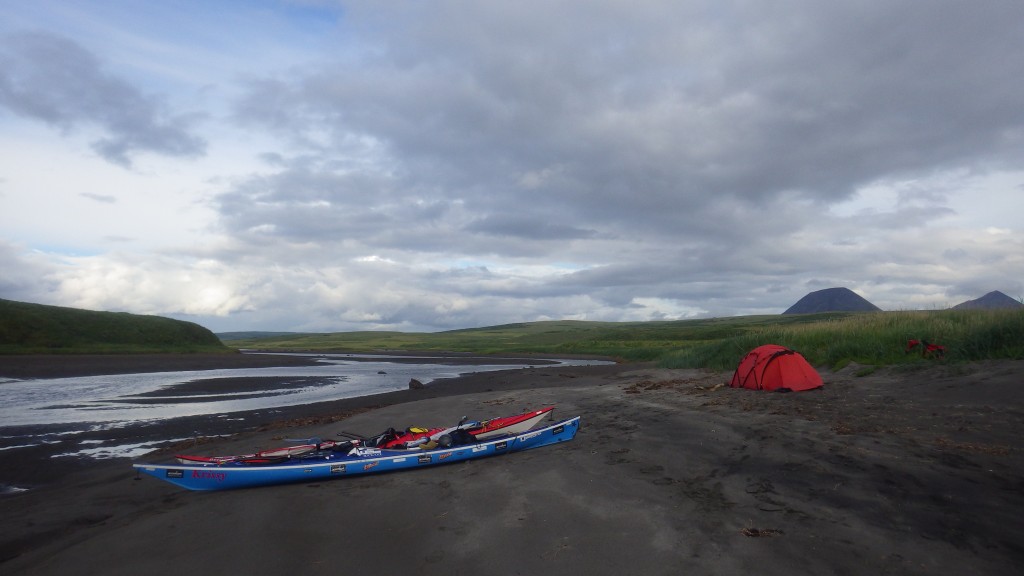 Our kayaks rest while we do too

‘It’s a bit different out here in Bush Alaska, isn’t it?’ said Pilot Steve Hakala as we walked back to our campsite from his little blue plane. He had just overflown us in it at low flight, waggling his wings in response to our grinning faces and friendly waves ( distinctly not the ‘I need a rescue’ sort of wave) and then landed his plane on the beach. That’s right, while out for a ride in his role as a Pilot for U.S Fish and Game he had dropped in to say hello,  the wide bouncy wheels on his little blue plane (can you tell I can’t remember what type it is?) allowing him to land almost anywhere, he said, even on water. 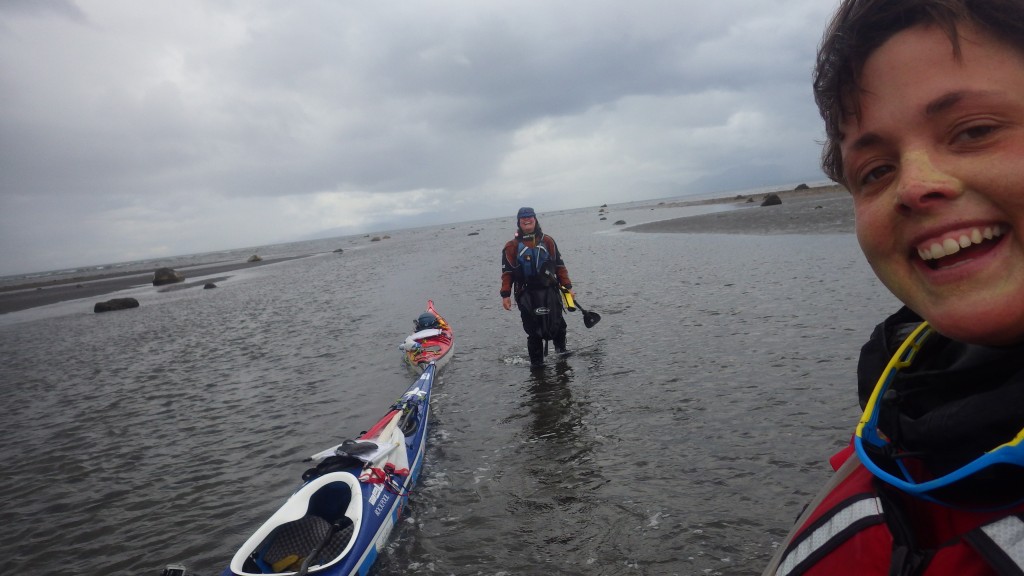 That is sun cream on my face! Happy after a good days paddle

He lives in the 900-strong community of Sand Point on neighboring Popof Island, 16 miles paddling from our then beach on Unga Island. An hour or so later he overflew us again with a biologist that he was taking out for surveys. One of the main jobs at the moment is aerial surveys of the salmon runs, assessing populations and how many fish are coming back up into streams, creeks and rivers to spawn. 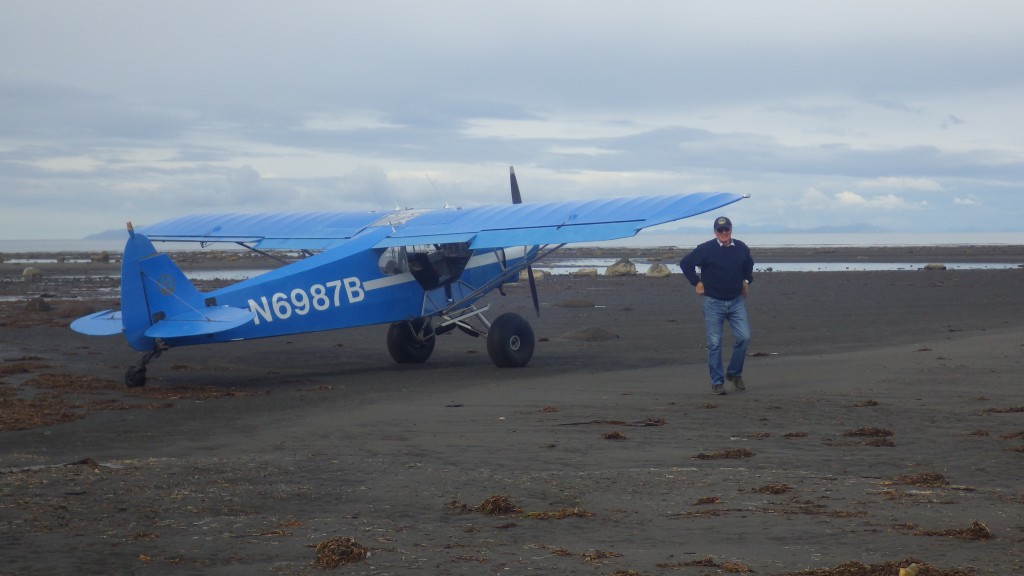 It’s a big deal as people’s livelihoods depend on salmon. Not just the commercial fishing boats supplying to local canneries but on a subsistence level families are starting to stock up for the winter – freezing, canning, drying  and smoking hundreds of fish. Salmon aren’t the only thing booming now. The berries are out! Justine and I have long awaited the sight of plump and juicy berries and, after seeing a splat of purple bird poo the other day I knew they must be ripe for eating somewhere. And they are, happily. So far we have been out picking the bright red and orange Salmon Berries, huge and juicy and good to eat straight from the bush.

Here in Sand Point there are no bears so I had no qualms about trudging through the alders berrying whereas over on the mainland I think I might feel rather differently about mouthfuls of juicy berries. In all this harvesting, the really lovely thing to me, as an outsider, is that people also provide for the Elders of the community who can no longer forage and fish for themselves. There is a real sense of togetherness in these remote communities we have been meeting along our kayaking journey. 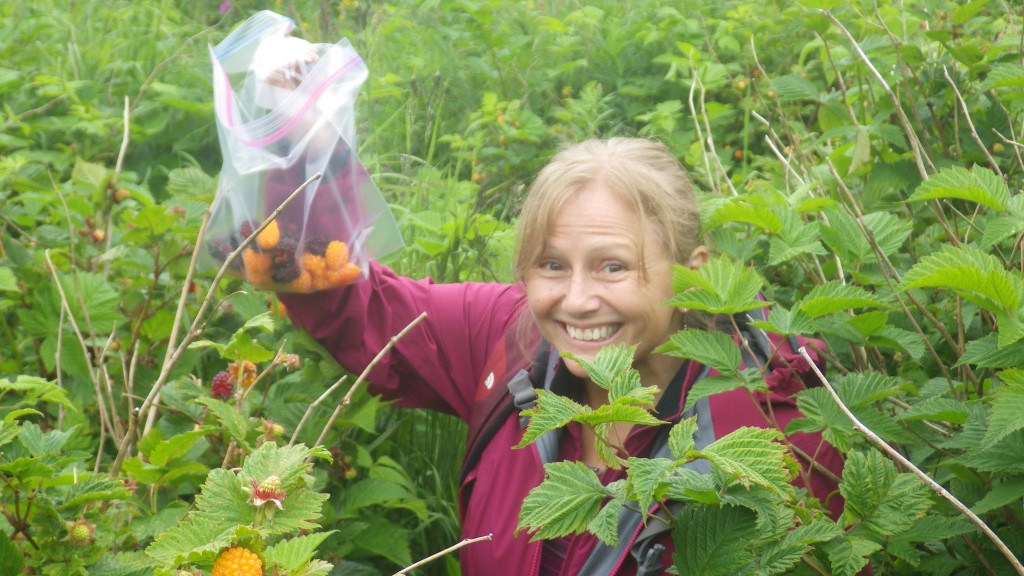 Like every community there are issues, however, and sadly, like many indigenous communities worldwide, the big problems out here are related to drink, drugs and domestic violence. Sand Point is the first time where we have really talked about this issue so openly with people, mostly because we have been staying with local Sergeant Mike Livingston of the  Sand Point Police Department. Up to now, we have just seen posters about domestic violence on toilet doors in public places and community centres and had the odd chat  here and there where locals have brought up the issue of drinking and its repercussions.

I remember one young lad telling me he didn’t drink because of his family’s history and another teenage girl telling us with sadness and regret the effects of alcohol in her village. In another community a young woman who worked as a bartender told us with a sigh of the maintenance drunks who ply her bar daily. It is such an issue that some of the native villages in Alaska are ‘dry’. I encountered my first mention of drugs last week with a gentlemen sitting at the bar in King Cove, rather well oiled after a day of drinking, sadly mourning the loss of his cousin on a fishing boat. Wearing a t-shirt and baseball cap with a cannabis leaf on it I asked, cheekily, if it was his favorite Alaskan flower. He grinned a far off, bleary eyed grin as he thumbed his now empty beer can and slowly turned to me to say yes, but that he had run out. He said he didn’t do ‘any of that nasty stuff like meth and crack’, saying that it was those things causing the problems.

Speaking to the police folks here it is sad to hear the stories and extent of the problem and how hard it is to investigate and deal with thanks to Alaska’s ‘Right to Privacy’ law in its State Constitution and the fact that drug dealers coming in and out briefly, but regularly, are some of the most culpable and hardest to catch.

What is clear, however, is that the local Police Department here are well integrated into the community, trusted and respected. Driving in the Police Car about the island seeing Mike wave at the children and locals from his drivers’ seat is a reflection of his approach to the work. For now, I hope our time with the officers is our only time with the police on our journey. Being met off the water once is cool, however another time it might mean we are in trouble. 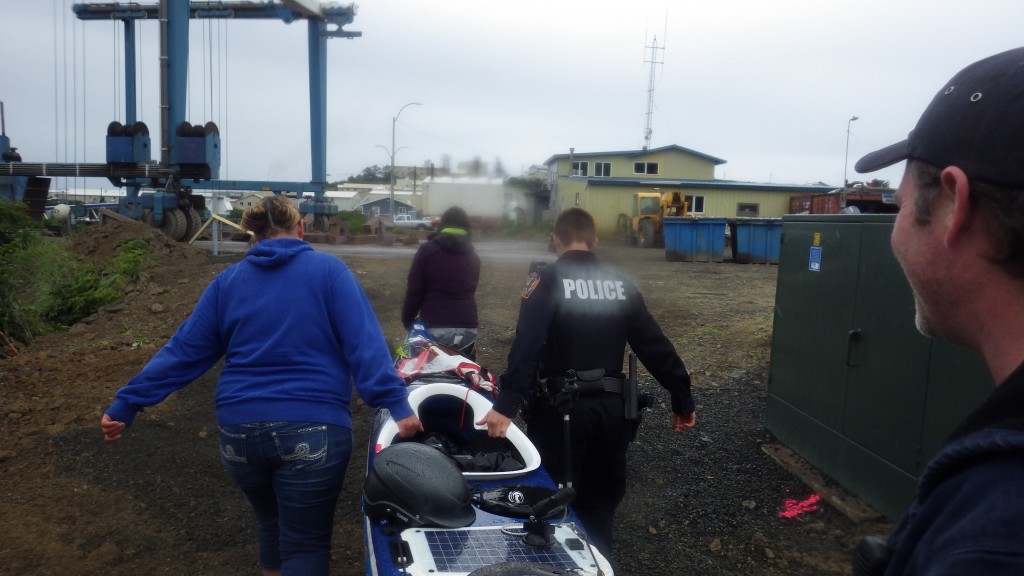 No trees out here

Or so we thought. Beyond the odd Cristmas trees that have been planted out here and there over the years, and the solitary blossoming fruit tree in Adak there are no trees until further up on the peninsula when the Spruces and Firs and Birches appear. Yet millennia ago there were and the other day we were lucky enough to have good weather which allowed us to paddle over an ancient forest and wander through fallen logs and stumps on the North West Coast of Unga Island. Normally I am excited about wood on the beach for its fuel potential but this stuff was never going to be burnt, for it was all stone, petrified bejillions of years ago after a combination of glacial, muddy, ashy, pressury stuff engulfed it and squashed it (to put it simply).

I kept doing double takes, tapping the logs with my nail to check they were not soft. Knots and grains and even stumpy branches look just like trees painted white or black; it was surreal.To see these remnants of eons past, a snapshot of life preserved through the rolling rumbling river of time and all that has tried to erode it, I cannot help but compare it to the people who live in these regions, trying to do the same but, sadly, it seems the forces of time and change have been rather harsher to them. 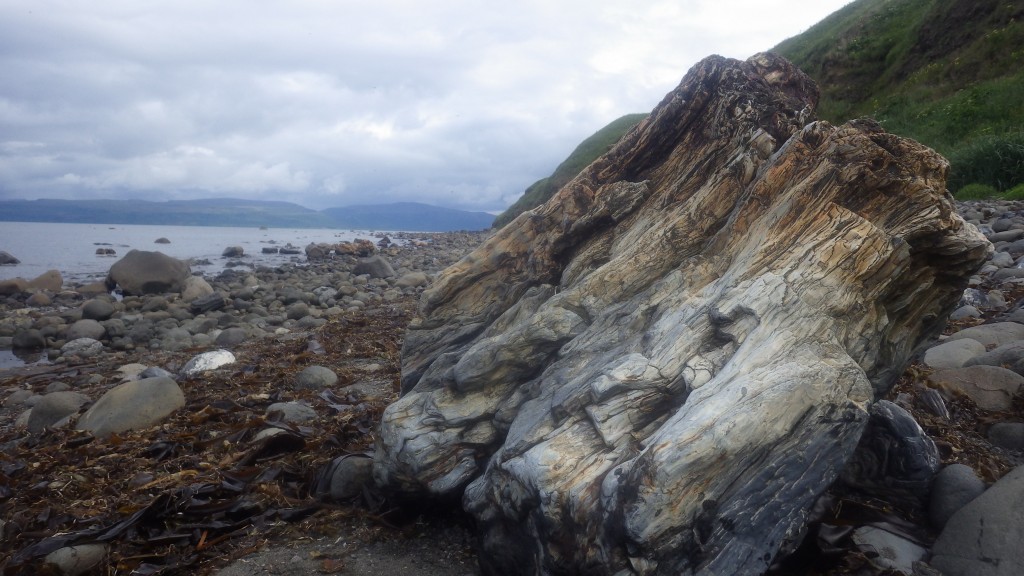 No useful fire food here! BUT the petrified wood is pretty cool

‘More things in museums than in our home lands’

Colonisation means erosion of many cultural elements that make up an identity of a people and out here it is no different. Local dialects are all but extinct in most places, the kayak is barely used anymore (which is sad as it was invented out here) and it seems annual Cultural Camps are, for the most part, the main way in which traditional skills and artistry are passed on.

We visited the first day of this community’s Culture Camp and met some of the instructors and children attending. We watched young teens skinning an octopus in a traditional food foraging class, and a table of first-timers start the laborious process of preparing grass to weave a tiny basket, while in another corner glass beaded headdresses were being made and on another table traditional drums were taking shape. 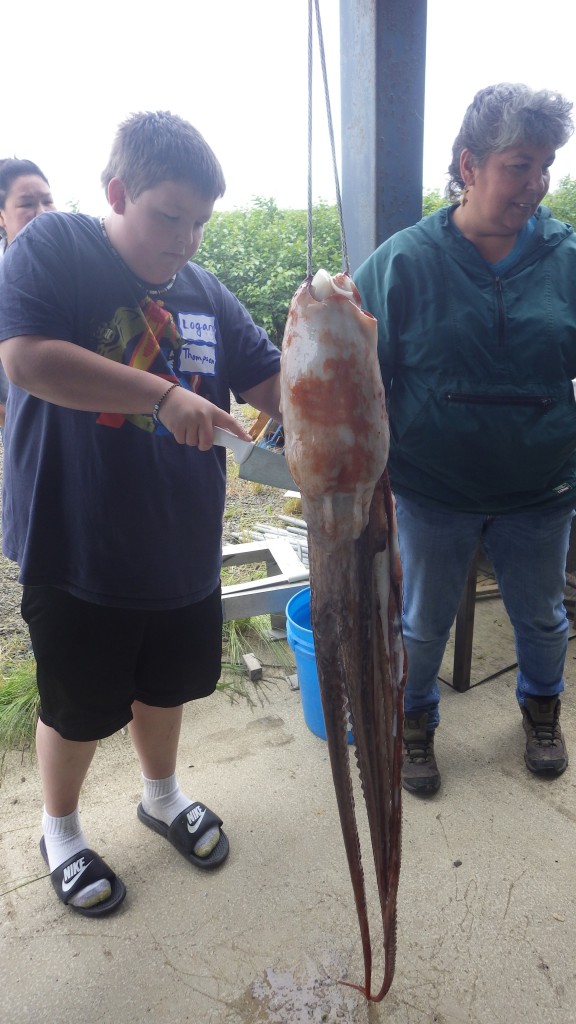 There were language classes and glass workshops and even traditional kayak building in both model and full size form. Ironically, it seems, the traditional kayaks seem to be launched once then relegated to hanging on school or community centre walls. We have only seen a couple so far in the community of Akutan that were used regularly. The words of basket weaver Sharon Kay were poignant as she explained the work which goes into making a traditional basket, while threading through tales of the task itself with her take on the erosion of skills. ‘There are more things in museums than our home lands. Reviving this and teaching this is my way of helping preserve our culture.’
Hats off to that, my friends, for the stories and tradition and histories that are woven therein are special and I say that anything to make a stand against the global march of homogenization has to be a good thing. 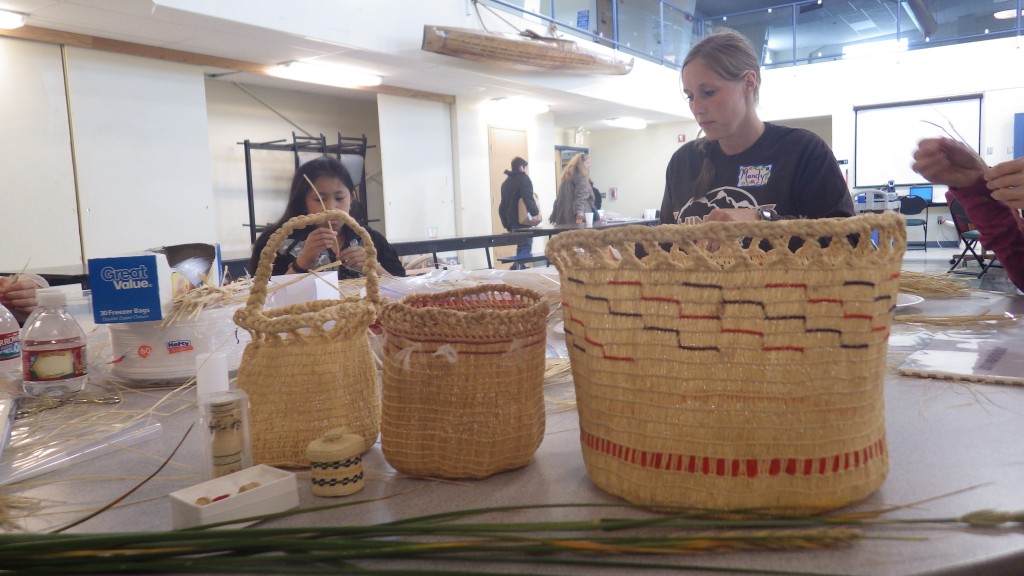 Weeks of work go into the grass baskets

On the kayaking front, we paddle on, well rested, clean and fed after three days here in Sand Point. A treat, I tell you, on all fronts. Thank you to all whom we have met for sharing with us and helping us in Sand Point. Tina for the berries and feeds, Annie for the jam, Eric and Malerie for the muffins, Denise for the massage, Luis for the boat repairs, Alan and David for the boat moving help, the Scot from Haines for the tipple, Paul for the drinks delivery, Steve for the buzz and the bone, Culture Camp instructors for the inspiration, to everyone who gave us fish on the beach and Mike Livingston for everything. 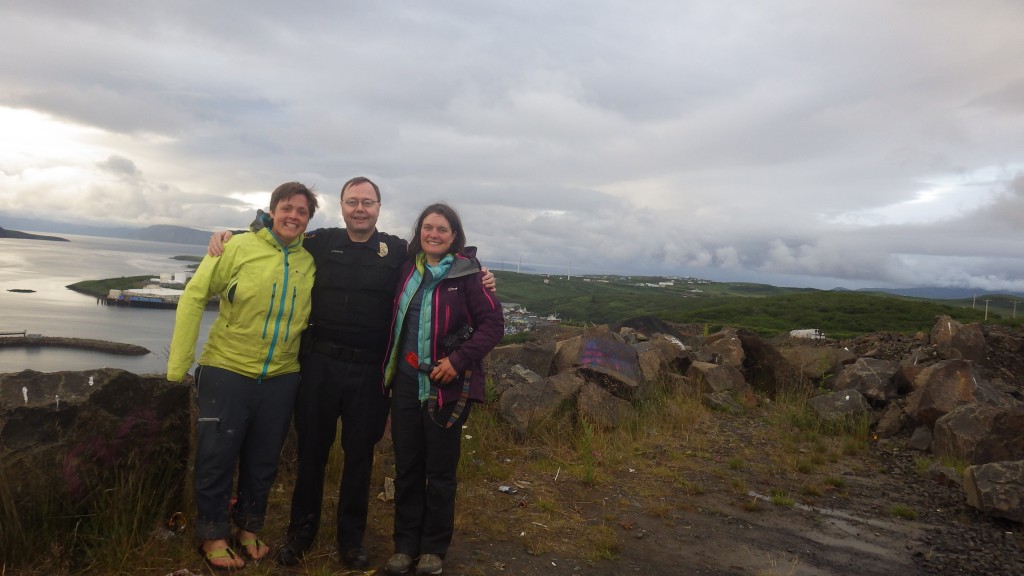 Sergeant Mike Livingston – what a star

Until next time,
Sarah x

P.S My latest blog for the Independent is here

P.P.S Lucy and I featured on BBC Radio 4’s Listening Project last weekend. The clip is called ‘Adventure in Love’. You can listen here