Everyone knows that China’s economy is one of the fastest growing in the world, eager for development and modernisation, fuelled by astonishing industrial growth over the last 30 years. A report I read online pitted the real growth in GDP per capita as a mammoth 270% between 1990 and 2005, whereas Britain in comparison sat somewhere way below at about 36%. To my mind that is both huge, impressive and rather worrying.

Having cycled nearly the whole way across this country now, through Xinjiang, Gansu and Inner Mongolia –  provinces which are playing both key roles in this development and also facing some massive environmental challenges – I have seen first hand a country locked in a battle. China is in a race with itself to balance present and future resource use with its bid to grow and improve the quality of life for its people.

A simple matter of balance

No easy task, though the problem is simple enough: China’s economic growth depends largely on heavy industry which is predominantly driven by coal, the nation’s most abundant natural resource. While coal availability itself isn’t a threat to China’s growth, water availability is. Coal mining and industrial use requires huge amounts of water and the country is facing a continued drop in available water sources – especially in the North, ironically where most of the coal is to be found. 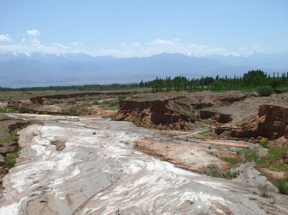 All dried up and waiting for the rains

One quote suggested that 600 million people live in provinces  with water stress and another from Circle of Blue said that since the turn of the century  China has lost 350 million cubic metres of water a year, the equivalent flow through the Mississippi in just nine months.

In short – Chinese energy demand and water consumption are rising, while the country is drying up.

As expected, all this heavy industry and development has lead to chronic environmental degradation and pollution. Habitat loss, desertification, air and water pollution, as well as bridges buckling and roads snarling with traffic – you don’t have to look far to find a story or see the scars.

A balancing act
So the question is: How can China balance all of these needs and address the issues in a way that provides for the future, repairs and nurtures the environment and somehow meets the expectations of its people, now hungry for continued change? Therein lies one of the most important questions of our time – not just for China, but the world, too.  For this is a global crossroads, one facing each and every country – how to move forward into the future is a sustainable way. 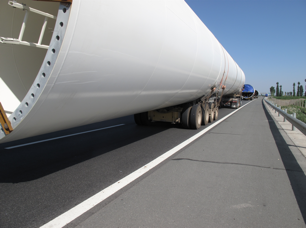 Dwarfed by a wind turbine

It will be interesting to see how things develop in the next ten or twenty years. From my saddle here in China, I have mixed hopes. Daily I am covered in grime from trucks and often I weave down lines of them kilometres long, all carrying coal or components to and from factories and mines. The factories and mines themselves are almost everywhere across the landscape – all leaving huge scars on the earth and belching out torrents of thick smoke and noxious gases. Until reaching the lower waters of the Yellow River last week, I had seen barely a trickle of moving water in the rivers for the past three weeks – most were dry river bed being scoured for gravel and mud or used as through routes.

Yet the other side of these problems lies hope and tangible examples of some great efforts and solutions to the challenges facing China. I have been overtaken lately by columns of trucks transporting huge components for wind turbines and have pedalled through wind farms nearly 100km long – the white rotors whirring in the strong winds, humming towards a future fuelled by cleaner, renewable energy. I read in China’s 12th Five Year Plan from earlier this year that it plans to reduce carbon emissions and water consumption through industry, partly by green energy solutions such as wind, solar and nuclear plants. The same goes for water shortage issues too – ten years ago the Yellow River didn’t reach the sea, but now, thanks to strict water usage quotas and some ingenious transport systems bringing water from the South, it flows into the East China Sea once more.

As to the future, I don’t know where my feelings swing at the moment – I am an optimist by trade but my journey through this changing country has brought out the realist in me, too. I hope, I really hope, that we can make the changes in time and  reach an equilibrium where the world is living within its means.

The clock is ticking. It’s time to rethink the future and make it happen.